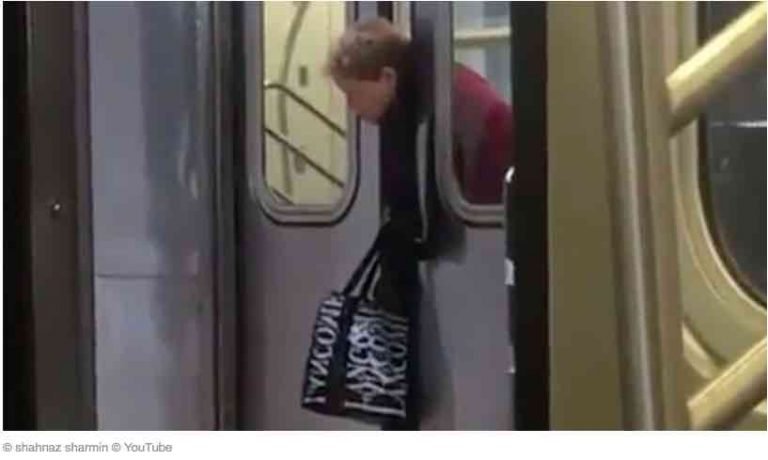 The end of compassion means the end of Humanity.

Bizarre footage of a woman with her head stuck in the door of a New York subway car has sparked outrage online after the video showed no one stopping to help her out.

The short clip, which was filmed Tuesday by a passenger on a car opposite, shows the unidentified woman with her head stuck between the doors, her handbag dangling out in front of her, while the rest of her body stays in the car.

Since being uploaded to Instagram Wednesday the video has been viewed more than 1.4 million times and generated more than 13,500 comments.

The woman remains silent during the clip, not even calling for help as passengers and at least one transport worker passes her by.

The lack of assistance has enraged netizens who thought someone should have helped the woman, although at least one good Samaritan can be heard calling for someone to help the stranded passenger.

“New Yorkers strolling around in their normal New York state of mind,” wrote one commenter. “There’s a human being behind a ‘camera’ filming the whole thing… instead of helping this woman… Nothing should have that much control over you, to where you don’t even help people,” expressed another.

Others, however, found humor in the unfortunate incident.

“Lmaoooo Yall need to relax… She’s just stuck in the door… She’s not dying. There is nothing anyone can do. The conductor has to open the door. She’ll be alright,” reads one comment.

“I don’t know if it’s because no one cared or the fact that she’s so calm but that’s hilarious. NYC will teach you to take care of yourself!” wrote one netizen, clearly familiar with life in the Big Apple. “It’s NYC! This is normal everyday stuff. Nothing is new here, people got places to go, just gotta keep it moving!” commented another.

The MTA told the New York Daily News that the worker seen in the footage was actually in the process of asking the conductor to open the doors to free the woman, not ignoring her.

“While this is an unfortunate incident, the passenger was able to get out safely with assistance from our train operator,” MTA spokeswoman Beth DeFalco told the outlet. “Because the doors were ajar, the train was never in danger of moving.”

CBS2 reports that once released the woman declined medical treatment and left the scene.