Nobody Dares to Admit That ISIS Crimes Are Based on Islamic Sources. 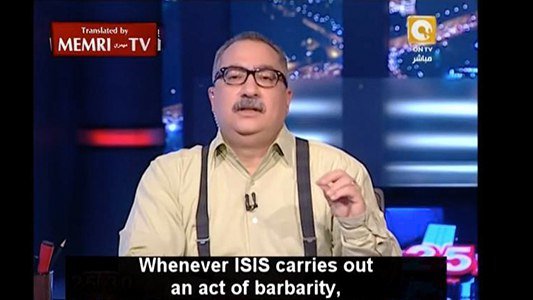 Absolutely right! And not only in the Koran! That’s why I have asked for many years that all religious books should be censored by a United Nations committee of religious leaders to remove every part inciting racism, violence, sexism etc…. In fact, removing everything which doesn’t respect Human Rights.

Ibrahim Issa: Whenever ISIS carries out an act of barbarity, such as decapitations, throat slitting, or the burning of a person alive, as they did today, various sheiks tell you – if they even bother to say anything – that this has nothing to do with Islam, that Islam is not to blame, and whatever. But when the people of ISIS perpetrate slaughter, murder, rape, immolation, and all those barbaric crimes, they say that they are relying on the sharia. They say that this is based on a certain hadith, on a certain Quranic chapter, on a certain saying of Ibn Taymiyyah, or on some historical event. To tell the truth, everything that ISIS says is correct.