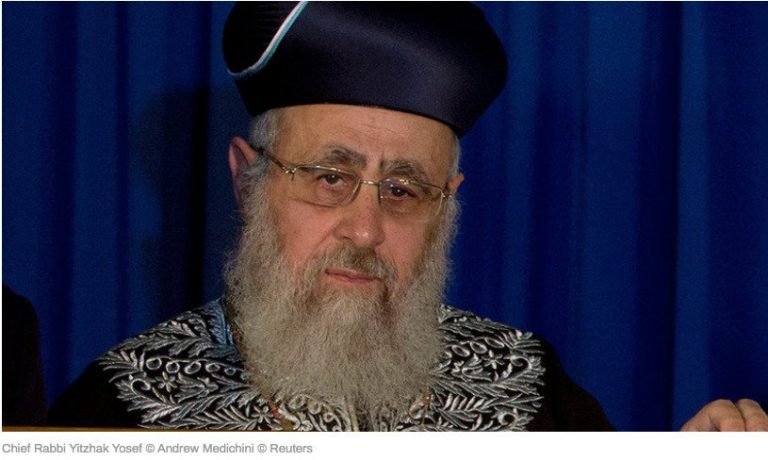 And no mainstream media react angrily to this! Imagine the world reaction if a French leader said suddenly that non-Christians should not live in France… but as it’s an Israeli rabbi… no reaction!

Sephardic Chief Rabbi Yitzhak Yosef has faced a public backlash after saying that according to Jewish law some non-Jews should be forbidden to live in Israel.

“According to Jewish law, it’s forbidden for a non-Jew to live in the Land of Israel – unless he has accepted the seven Noahide laws,” Rabbi Yosef said during his weekly Saturday lecture on March 26.

Non-Jews who fail to live by the seven Noahide laws should be expelled to Saudi Arabia, he added.

The seven Laws of Noah include prohibitions against idolatry, blaspheming God, murder, illicit sexual relations, stealing and eating a limb of a live animal. It also prescribes the establishment of a legal system that would ensure obedience to the law.

If a non-Jew stays in Israel, he has to serve the Jews, the Rabbi said.

“Who will be the servers? Who will be our assistants? Therefore, we leave them here in the land,” he said.

However, following a wave public outrage, Yosef had to backtrack on his comments. He explained that his words had nothing to do with today’s world as he had been referring to the “days of the messiah.”

“These laws are theoretical, [and] refer to fulfilling the seven Noahide Laws in the days of the messiah, and have no connection to the present day,” he wrote, adding that he has “always adopted a peaceful and embracing path.”

“It’s clear that there’s no law in our time, God forbid, to expel non-Jews from Israel,” he concluded.

This is not the first time Chief Rabbi Yosef has found himself in hot water over his comments. Earlier this month he said that Israelis should not be afraid to kill terrorists armed with knives.