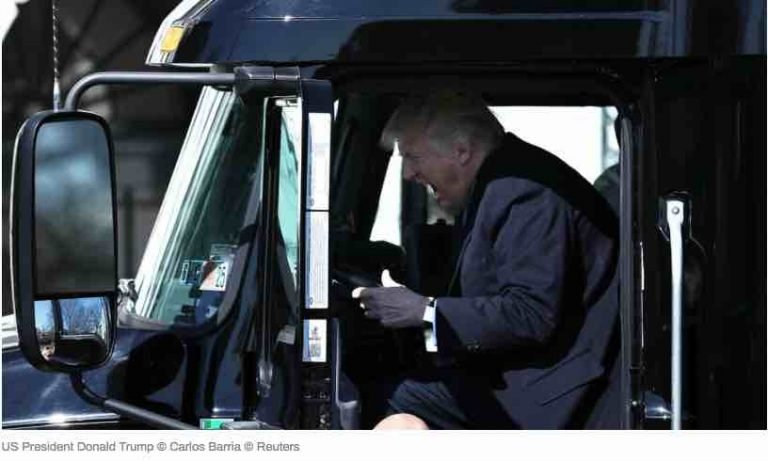 Free speech must always be respected everywhere and about every subject. It’s a fundamental Human Right.

A female motorist in Texas was arrested after driving her truck with a “F**k Trump” sticker in the Houston area. Despite police citing an unrelated reason, the situation prompted outrage, firing up a debate on freedom of speech and its limitations.

Karen Fonseca, 46, made waves after choosing to play it straight about what she thinks of President Donald Trump and his supporters. The woman was arrested on Thursday for what was said to be an outstanding fraud warrant from August, local channel KTRK reported.

“F** Trump and f** you for voting for him,” the sticker posted on the rear window of her truck said. “I think it’s the sticker,” her husband, Mike Fonseca, the owner of the truck, said outside the Fort Bend County Jail. Fonseca was released late on Thursday night. “People abuse the badge, in my opinion, and money talks,” she said.

Earlier this week, Fort Bend County Sheriff Troy Nehls posted a photo of the truck message along with a request, seeking to talk to the driver. “If you know who owns this truck or it is yours, I would like to discuss it with you. Our Prosecutor has informed us she would accept Disorderly Conduct charges regarding it, but I feel we could come to an agreement regarding a modification to it,” Nehls wrote in his message on Facebook.

The sheriff’s remarks came under fire from the American Civil Liberties Union of Texas (ACLU), which said “You can’t prosecute speech just because it has the word “f**k” in it. (And the owner of the truck should feel free to contact @ACLUTx.)”

But Nehls told the Houston Chronicle that he had received calls, texts and emails from people who allegedly took offense at the language in Fonseca’s “F**k Trump” message. Nehls also posted a picture of the section of Texas law that could be used against the truck driver.

Fonseca said the sticker on her car was just a means of expressing her right to free speech. “It’s not to cause hate or animosity,” she told the Houston Chronicle. “It’s just our freedom of speech and we’re exercising it.”

Fonseca, who reportedly used to work for Nehls in the county jail, told the newspaper that she and her husband had placed the sticker on the window after Trump was sworn into office in January.

The sticker has created a buzz many times before, Fonseca noted, adding that police pulled her over but failed to find a pretext for writing a ticket over her anti-Trump stance.

“We wanted our statement out there. That’s our opinion on him,” the woman told CNN.

“A lot of females say I wish I had the balls to do that,” the daredevil motorist said, adding that she is not going to remove the sticker “because I know I’m not violating any laws or rules.”

Legal experts, meanwhile, say the driver has a constitutionally protected right to make her message heard. “It would be dangerous to our freedoms if you start going that route where a sheriff has the right to start censoring people about what might be offensive,” Philip Hilder, a Houston criminal defense attorney and former federal prosecutor, told AP.

Is [the truck sticker] tasteful? No. Is it dignified? No, but it’s still a person’s statement that is constitutionally protected,” Hilder said.