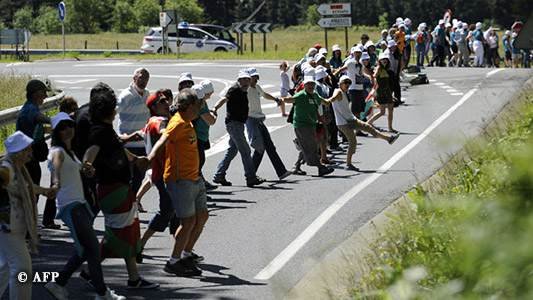 Viva the independent Basque Country! It became part of Spain through violent military conquest like Scotland so it is justice.

At least 100,000 people have formed a 123-kilometer-long human chain in support of a regional referendum on the Basque Country’s independence from Spain.

People began to link up at noon to form a continuous line along a road that connects the northern cities of Durango and Pamplona in the neighboring Navarra region, considered part of Basque cultural heritage.

The organizers of ‘Gure Esku Dago’ (It’s in our hands) initially said that around 50,000 people would be just enough to cover the distance of 123 km. But the turnout went beyond expectations with some reports indicating that 150,000 people eventually took part in the campaign.