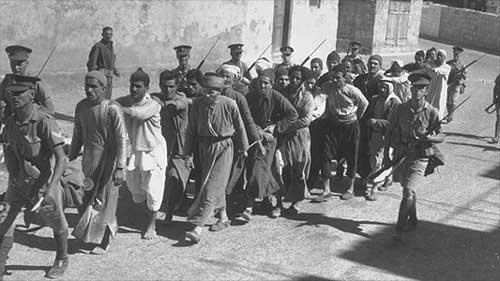 * British intelligence documents declassified:
1- All the battles Palestinians fought during the Nakba were victorious, but either they run out of ammunition or the British army would intervene to rescue besieged “Israelis”, and the situation then would turn around.
2- The places that Palestinians controlled, and the weapons they seized from the remnants of the British army were confiscated by the “Rescue Army” (Arab armies (their countries eventually were still under European occupation)), who in turn withdraw from these areas so that the Israelis could simply take them over.
3- The Nakba did not happen on May 15, 1948. Rather, it began in the middle of 1947, and ended with the signing of the Rhodes Treaty in 1949.
4- The Zionists began gathering information and planning to occupy Palestine [actually], since the mid-twenties, and at the end of 1933, they had records for every Palestinian individual, tree, shop, car, gun, sheep and donkey owned by a Palestinian,
5- The first act that Israel took after the conquest of Palestine in 1948 was to steal Palestinians personal libraries that were in the abandoned houses.
6- The civilization that Palestinian cities lived in before the Nakba is amazing. They had 28 magazines, cinemas, public libraries, theatres, newspapers, radio stations, ports, and buildings with amazing architecture. .
7- The name of Israel was not mentioned in the news nor in periodicals and newspapers, even after Balfour Declaration. The name of this country was as it is now – Palestine – even in early Zionist literature it was called Palestine.
8- Palestinian villages, which exceeded 500 villages, were not only forcibly displaced by the Zionists, but also destroyed in the literal sense of the word. They left no trace in them except what they forgot by chance, and they meant by doing that, that time would pass and those villages would be forgotten from history.
9- Britain not only made the Balfour Declaration, but tolerated the Zionists who killed its soldiers as well, and allowed the arrival of Jews from Europe to Palestine, and arrested every Palestinian who had a knife, while the Zionists owned underground weapons factories with the flag of Great Britain.
10- The Palestinian strike (civil disobedience) of 1936 which lasted 6 months succeeded and the plan to establish the State of Israel would have failed, had it not been for the intervention of our friends !!!??
11- There were many zion!$t J€w$ who had a close relationship with Palestinians ( know the weaknesses of every Palestinian village) and they took advantage of this relationship to commit massacres later.
* Quoted from declassified British intelligence documents.*