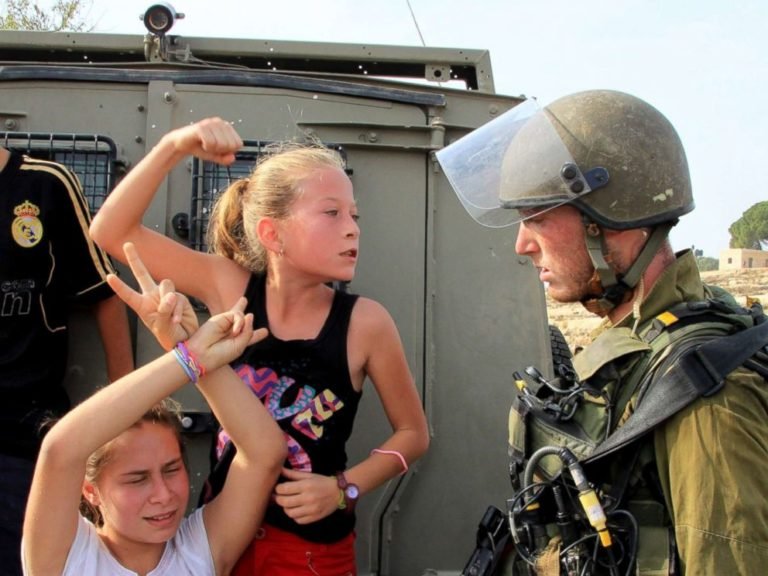 Beautiful resistance, similar to the man in Beijing standing in front of a tank. How can these soldiers sleep at night? If American people were as human and compassionate as when they forced the US government to leave Vietnam with massive protests, they would do the same to force Israel to leave occupied territories. But compassion has totally disappeared in a world of ego and selfishness. That’s why each country must like that North Korea owns nuclear weapons if they don’t want to end up being massacred by western invaders and colonialists who only attack the weak. “The life of one human being is more important than all Humanity”, especially if this Humanity has lost its sense of compassion, solidarity, and love. Such Humanity doesn’t deserve to survive.

Israeli authorities have charged a Palestinian teenager with assault after a video of her hitting and pushing Israeli soldiers went viral.

Ahed Tamimi, 16, and her cousin were filmed in a confrontation with the soldiers that was widely shared by Palestinians on social media.

She faces 12 charges including aggravated assault and throwing stones.

But the family say they were involved in legitimate resistance during protests in the occupied West Bank.

Israel’s military says the soldiers were preventing Palestinians from throwing stones at nearby motorists.

The video, filmed on 15 December, shows a group of women including Tamini shouting at, hitting and kicking two heavily-armed Israeli soldiers.

It was widely circulated online, and many Palestinians have hailed Tamimi as a hero of the resistance to Israeli occupation.

Palestinians recall envoy to US
Trump Jerusalem move sparks Israeli-Palestinian clashes
Why settlement issue is so difficult
On Sunday, her cousin, Nour Tamimi, was charged with assault and disturbing soldiers from carrying out their duties. Her mother, who filmed the video and posted it on Facebook, has also been charged.

At the time of her arrest, Ahed’s father said soldiers had fired tear gas and broken windows at the family’s house.

Bassem Tamimi, a prominent activist, added that Ahed’s 15-year-old cousin, Mohammed, had also been hit in the face with a rubber bullet fired by Israeli soldiers.

Mohammed was reportedly wounded during a weekly protest in the village of Nabi Salih where the Israeli military said more than 200 Palestinians threw stones.

“Several Palestinians entered a nearby home and continued throwing rocks at soldiers from inside the home with its occupants’ consent,” the military said.

“Forces removed the rioters from the home and remained standing in the entrance in order to prevent further entry. Later, several Palestinian women came out to face the soldiers in order to incite provocation.”

The military said an investigation had determined that an infantry company commander was one of the two soldiers shown being confronted in the video, and that he had “conducted himself professionally by not responding in kind”.

In the video, the girl identified as Ahed can be heard telling the soldiers to leave the entrance to the home. When they do not move, she punches and kicks the soldiers. A second girl and a woman also push and kick the soldiers later in the video.

Last month, Mr Tamimi told the Israeli newspaper Yedioth Aharonth that the incident in the video took place after the soldiers “entered the grounds of the house, started throwing gas grenades around and broke the house’s windows”.

“Their conduct may seem humane at that instance, but I don’t think their general conduct that day was humane. I’m proud of my daughter and what she did”, he said.

Two years ago, Ahed Tamimi was in a video which went viral in which she was seen biting the hand of an Israeli soldier holding a Palestinian boy who the army said had been throwing stones.

Palestinian activists praised her actions, while many in Israel accused her family of using her as a propaganda tool.