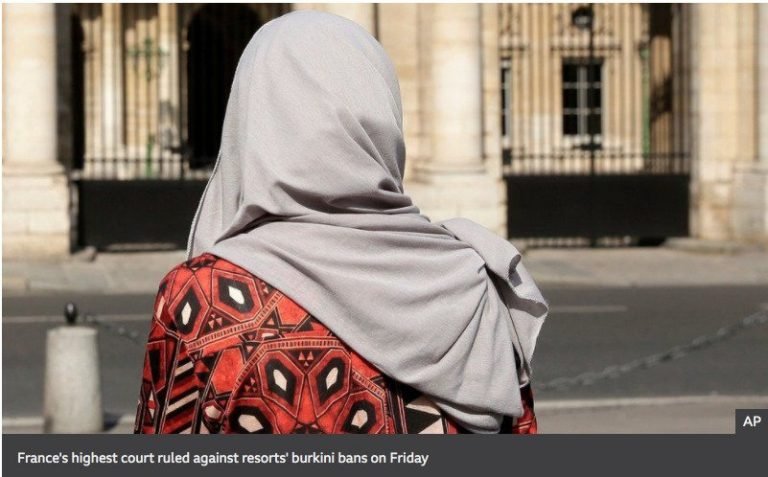 73 years after French restaurants with boards saying: “No dogs or Jews allowed”, will we see new ones with “No Muslims allowed”? By the way, for your information, dogs are accepted in all French restaurants as surprising as it may sound for US people… and it would be a revolution if dogs were suddenly forbidden… But for Muslims: no revolution… The country that promoted slave trade, whose police arrested Jews to hand them to Nazis, that is now jailing historians who study the Holocaust and question the dogmatic number of six million, that is now jailing for five years people who are saying they are pro-human cloning, and that dares to claim to be the fatherland of Human rights… laughable.

A video showing a restaurateur in a Paris suburb apparently refusing to serve two Muslim women has sparked anger in France and calls for protest.

In the video, widely shared on social media, the man tells the hijab-wearing women: “Terrorists are Muslims and all Muslims are terrorists.”

The incident took place at Le Cenacle restaurant in Tremblay-en-France on Saturday night.

On Sunday, the man apologised to a group who had gathered outside.

He said he had “got out of hand” due to the current tensions around the issue of wearing burkinis on French beaches, but also because he had a friend who had died at the Bataclan concert centre attack last November, Le Parisien reported (in French).

The local prosecutors’ office told the paper that it had opened an investigation into racial discrimination.

A journalist from the paper photographed the “tense exchange” outside the restaurant between the man involved in the incident and a group of young men:

The video inside the restaurant appears to have been covertly filmed by one of the women, who were clearly emotional.

“We don’t want to be served by racists,” one of them said.

He also said: “I don’t want people like you at my place. Full stop.”

Government Minister Laurence Rossignol said that she had asked Dilcra, a government anti-racism body, to investigate, describing the behaviour as “intolerable”.

A court ruling on Friday overturned France’s controversial burkini ban on civil liberties grounds, but some local authorities have vowed to keep it in place.

French anti-Islamophobia organisation CCIF said that “following the umpteenth Islamophobic incident which… led to the humiliation of two young Muslim women” its director would be speaking outside the local mosque on Sunday evening.

The CCIF, which says it is offering legal and psychological support to the two young women, appealed for no protests outside the restaurant itself.