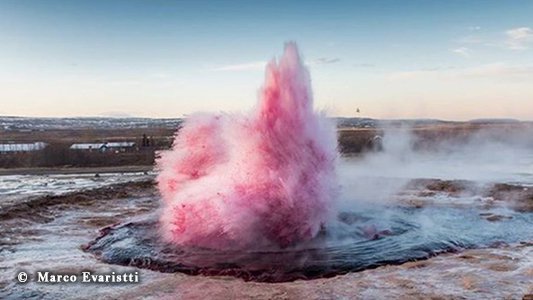 A wonderful art creation decorating natural environment with natural substances ! An embellishment of the natural environment ! That s art at it s best ! According to the logic of stupid critics draped in politically correct ” environment concerns” we should never take any stone from a mountain to make sculpture or cathedrals in order to ” respect the natural environment of the mountain” ! Too bad for Donatello, Michelangelo, Rodin and others… But these people have no concern at all using plastic which pollute oceans or using gasoline in their cars… Congratulations Marco Evaristti and don’t stop your great work which put art where it should be : in the nature and not in museum which are a kind of art prison.

Marco Evaristti was slapped with a 100,000 Icelandic kronur ($740; £490) penalty for dyeing the famous Strokkur geyser using food coloring. The Danish-based Chilean artist has so far refused to pay up, and on Sunday he left Iceland without any objection from the police, the Morgunbladid website reports. Mr Evaristti says the dye he used to turn the hot spring pink was harmless, and that people’s criticism shows their “concern, care and love for nature”. It was part of a long-term project which, among other creations, has seen him dye a Saharan sandbank – and nearby sheep – pink.

The artist has faced a tirade of online hostility over the past few days, with many people accusing him of arrogance and disrespect for Iceland. “All artists choose their canvas, but when it goes so far as to potentially harming natural environments you have to know where to draw the line,” reads one comment on Mr Evaristti’s Facebook page. A smaller number defend the artist and criticize the tone of the debate. “I’m embarrassed by the way people talk to you,” says one woman, who describes the pink geyser as “beautiful and thought-provoking”. She adds: “I wish that people would act this way when some of the BIG companies and governments are truly ruining our nature!”