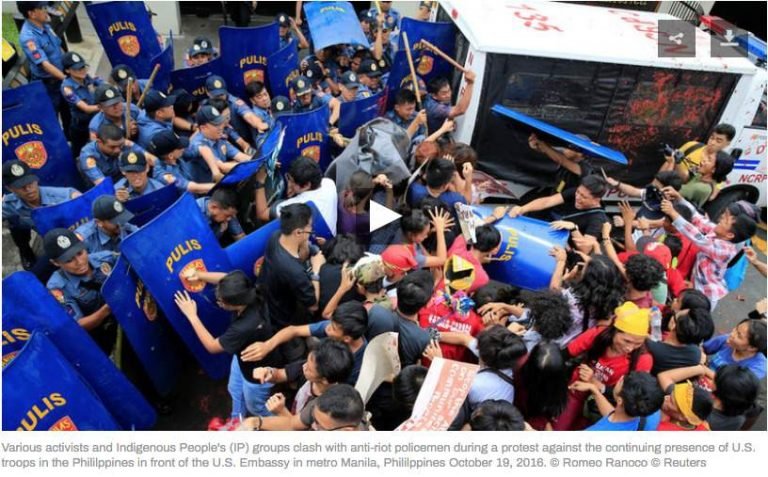 All countries should expel US militaries.

A rally protesting the presence of American troops in the Philippines has turned violent outside the US embassy in Manila, with police using tear gas against demonstrators. Several people were run over by a police van.

AP footage shows the van repeatedly ramming into protesters as it drove back and forth among the crowd. It occurred after demonstrators surrounded the vehicle and began hitting it with wooden batons seized from police.

At least three student activists were taken to hospital after being run over, protest leader Renato Reyes told AP.

Police arrested 23 protesters who broke into a line of riot police and hurled red paint at officers and a US government employee.

Responding to the violent dispersal of protesters, Reyes said “there was absolutely no justification for it.”

“Even as the president vowed an independent foreign policy, Philippine police forces still act as running dogs of the US,” he added.

An image posted on social media showed protesters gathered outside the embassy, with reports saying they tried to seize the building.

The demonstrators are reportedly national minorities, who are pushing for an independent foreign policy for the Philippines.

One image showed the protesters holding a sign which said “No to US bases & troops.”

Protests against the presence of US troops have been ongoing.

Six people were arrested in a similar protest outside the embassy last month. In June, students in Manila gathered to protest the EDCA by burning the American flag.

Despite senators voting to reject a new bases agreement in 1991, US troops have returned to the country through the 1999 Visiting Forces Agreement, and have been allowed to increase their presence and use local military facilities through the Enhanced Defense Cooperation Agreement (EDCA).

The call for an independent foreign policy align with the plans of President Rodrigo Duterte, who has recently targeted the US with harsh words, over Washington’s criticism of his controversial “war on drugs.”