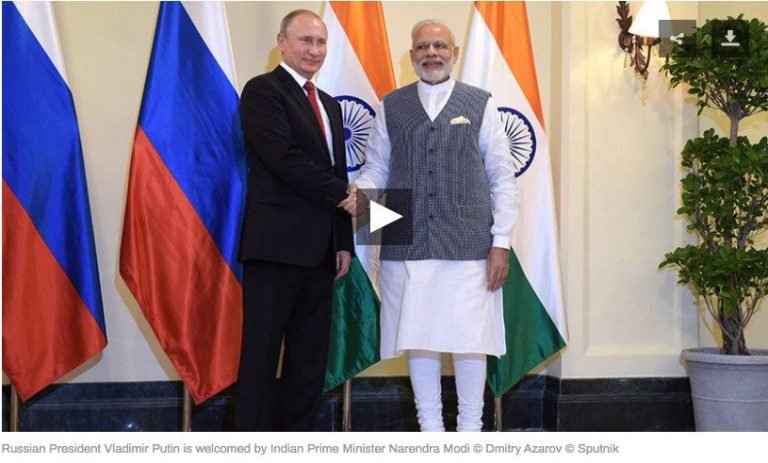 Indian Prime Minister Narendra Modi and Russian President Vladimir Putin have launched the second phase of the Kudankulam Nuclear Power Plant and signed a number of agreements regarding military and economic cooperation at BRICS summit in Goa.

Putin and Modi officially launched the second phase of the Kudankulam Nuclear Power Plant (NPP), currently being built in the Indian state of Tamil Nadu by Rosatom as part of a deal signed between Moscow and New Delhi back in 1998, RIA Novosti news agency reported.

The two heads of state also laid the foundation stones for the third and fourth blocks of the Kudankulam via a video conference following bilateral talks on Saturday. The first unit was already put into operation in August this year. Earlier this week, President Putin said the operation of the first and second units at their rated capacity will “significantly increase the energy supply in India and strengthen its energy security.”

According to Russia’s Deputy Prime Minister Dmitry Rogozin, agreements were reached on three highly important documents, including the S-400 delivery to India.

“S-400 it is our newest system. We are currently equipping our own military forces with it and we are making an exception only for our closest allies, such as India and China.

The fact that we have reached agreements with both India and China [regarding S-400 delivery] shows a lot. It shows that Russia exports its most advanced technologies to the countries it trusts, with which it is building strategic partnerships,” he stressed, mentioning Russia’s agreement on S-400 exports with China, the first foreign buyer of the system. That deal was announced in the spring of 2015. According to media reports, the transaction amounted to about $3 billion.

The other two documents Rogozin mentioned are the deal on manufacturing Project 11356 destroyers for the Indian naval forces and the agreement regarding the launch of joint production of Ka-226T utility helicopters for India’s civilian air transportation. The Ka-226T utility helicopter is a new version of the light multi-purpose Ka-226 helicopter, capable of carrying up to 1,100kg (2,425 lbs) of payload in the cabin or on an external sling. According to the agreement, a joint Russian-Indian enterprise is to build 200 helicopters within the next 10 years.

The two leaders also agreed to create an investment fund with a budget of one billion dollars to support some 20 selected projects of both Russian and Indian origin in the spheres of infrastructure, construction, and innovation.

According to the agreements, Russia’s state-owned oil company Rosneft will acquire 49 percent of Essar Oil, an Indian-based company engaged in the exploration and production of oil and natural gas, for 3.9 billion dollars in exchange for debt restructuring. The acquisition will be funded by Russia’s VTB Bank, TASS news agency reported.
Also, Gazprom and Engineers India limited have signed a memorandum on mutual understanding and research for a gas pipeline route to Indian refineries. Less than a year ago, Russia agreed to supply India with 10 million tons of oil and petroleum products annually in the next 10 years.

The leaders agreed to create a special commission on science and technology in the near future.

Addressing the press, Indian Prime Minister Narendra Modi started his speech with the Russian proverb, “an old friend is better than two new ones,” as cited by TASS news agency.

He said that the talks went very well and gave the mutual ties a new momentum.
“The negotiations between India and Russia gave a clear direction, a new, stronger momentum, a clear and rich purpose to our ties,” he said, praising specifically the deals in the oil sphere and the production of destroyer ships and helicopters. He added that the two countries continue to broaden their economic cooperation.
“Within the past 4 months, Indian oil companies invested some 5.5 billion dollars into Russia’s oil industry,” Modi said.

The two leaders expressed content at sharing similar views on major global crises and problems, especially regarding the fight against global terrorism. Prime Minister Modi expressed gratitude for Russia’s support of India’s efforts in this fight.
“We highly appreciate Russia’s understanding and support of our actions against international terrorism, which poses a threat to our entire region,” he said.

Putin and Modi also both stressed the need to restore the truce in Syria, as well as provide humanitarian assistance to the population in besieged areas and continue political dialogue under the auspices of the UN, according to a joint statement released after the talks, as cited by RIA Novosti news agency.