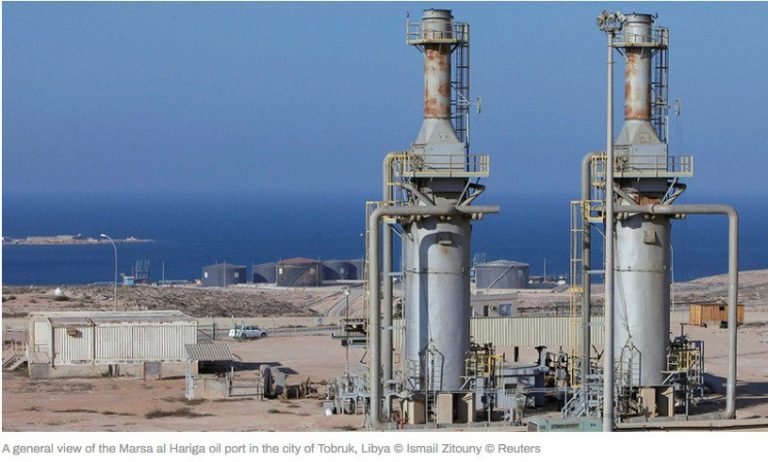 “Rogue”? What was “rogue” was to attack and invade Libya and kill Kadhafi.

The US and several of its allies have condemned the takeover of four oil terminals in Libya by the country’s rival administration, calling for an immediate withdrawal. Those behind the seized ports say the move was necessary to protect the nation’s wealth.

“The Governments of France, Germany, Italy, Spain, the United Kingdom, and the United States condemn this weekend’s attacks on Zueitina, Ras Lanuf, Es Sider, and Brega oil terminals in Libya. We call on all parties to undertake an immediate ceasefire and to refrain from any further hostilities,” the US State Department wrote in a statement on its website.

It went on to stress that the six countries see the UN-backed Government of National Accord (GNA) – which ran the oil terminals prior to the seizures – as Libya’s “sole executive authority.”

“We call for all military forces that have moved into the oil crescent to withdraw immediately, without preconditions,” the joint statement added.

Meanwhile, the GNA itself has also called on those responsible for the seizures to be defeated, with a Sunday statement from the government’s Presidential Council calling the attacks “unjustified escalation” that would “prolong the period of conflict” in Libya.

But forces loyal to General Khalifa Haftar – who opposes the GNA and supports the rival government in the east of the country – said the seizures were necessary because the GNA in Tripoli had been distributing oil sale revenues unfairly. It said that Libyan armed forces took over the ports in an effort to protect the source of national income and end political blackmail that has cost Libya US$100 billion over the past three years.

The Tobruk-based rival administration did, however, vowed to fulfill national export commitments.

“The Libyan national oil corporation will fulfill all obligations and contracts that were agreed with local and foreign companies,” parliamentary speaker Aguila Saleh Issa said a statement, as quoted by Sputnik.

The Sunday seizures by the Libyan National Army (LNA), which is also loyal to forces in Libya’s east, led to the takeover of Sidra and Ras Lanuf, neighboring oil terminal towns, from the Petroleum Facilities Guards (PFG). In addition to the terminals themselves, a 220,000 barrels-per-day refinery was seized, along with a petrochemical complex, a military and civil airport, and oil company buildings.

In addition, the LNA also took control of the south and east gates at Ajdabiya and the headquarters of the Zueitina oil terminal, leaving PFG with hardly any territory.

The LNA said the operation – dubbed Swift Lightning – had been planned for months and was achieved with minimal bloodshed.

The attacks have prompted worries about a wider battle over Libya’s resources, as the oil-rich country has the world’s ninth-largest oil reserves.

One of those worries came from Martin Kobler, head of the UN Support Mission in Libya, who tweeted his concerns and stressed that Libya’s oil belongs to “all Libyans.”

worried about reported fighting in the oil crescent. will add to division and further restricting oil exports. oil belongs to ALL libyans.

— Martin Kobler (@KoblerSRSG) September 11, 2016
In a news release, Kobler said the attacks “further threaten the stability and lead to a greater division of the country. They further restrict the oil exports and add to people’s suffering.”

Libya has been struggling to regain political stability since the 2011 NATO intervention helped depose and murder former leader Muammar Gaddafi. Rival powers and militias have been fighting for control over the country ever since. In December of 2015, the UN-brokered GNA and a Presidency Council were created in an attempt to return stability and peace to the country. However, it has been difficult for the fledgling Tripoli-based government to assert authority over the country, which is still home to a number of rival factions that oppose it.