The challenge of the truth 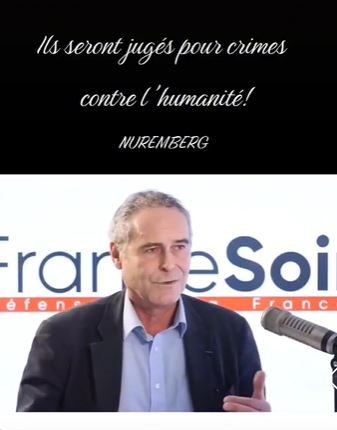 „They will be tried for crimes against humanity!“
– Nuremberg
The media are starting to get scared because they have been broadcasting state lies every day for almost two years to scare the French, to make them accept whatever they want, and they will be held accountable instead.
You have to know that to force an experimental product is against the Nuremberg Code, it is a crime against humanity. It’s not me saying it, it’s international law.
They pretend to say, „No, these are silly stories,“ and all that, but one day, the editors of the major French TV stations, of the major newspapers, will be in court for complicity in a crime against humanity. I have no doubt about that.
There are now tens of thousands of deaths everywhere. It is that these vaccines are dangerous, that they have very serious side effects, that young people have lost all autonomy. We cannot continue to deny the evidence.