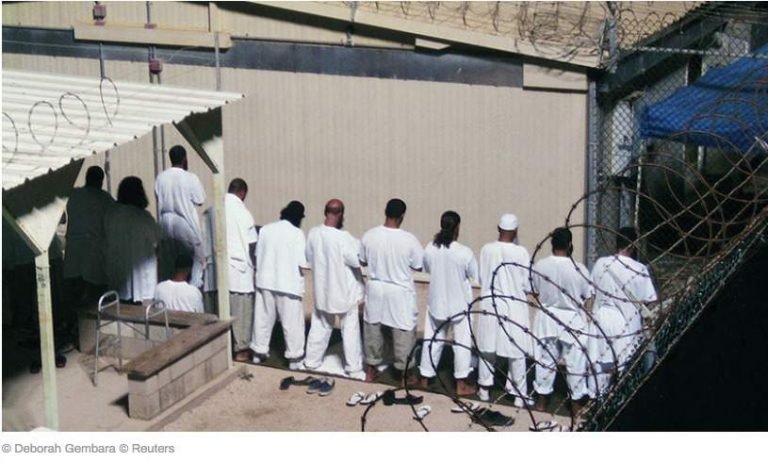 All that under a Nobel Peace Prize winner! Shame on the Nobel committee! And Obama will stay in History as a liar who promised to closed Guantanamo before being elected.

Exactly 15 years ago, the first inmates were transferred to the infamous Guantanamo prison, with the facility gaining an increasingly grim fame ever since due to reports of torture and abuse of the detainees.

With Guantanamo still operating, RT looks at some of the most disturbing techniques allegedly practiced with some of the inmates there.

Sleep deprivation
It was claimed that the inmates in the infamous prison have been stripped of sleep for days and even weeks. According to the UN Commission against Torture (CAT), sleep deprivation reduces the body’s ability to resist pain, thus making the person more liable to cooperation with investigators. It can also cause hallucinations, psychosis and lowered immunity.

Lawyers for the Gitmo inmate Salim Hamdan said in 2005 that their client was included in the so-called “Operation Sandman” in 2003 and deprived of sleep for at least 50 days. “Sleep deprivation of that nature for 50 days would constitute torture,” Joseph M. McMillan, one of Hamdan’s lawyers, said at the time.

In another case, Gitmo prisoner Mohammad Jawad was moved from cell to cell 112 times over the period of just 14 days in 2004. Jawad, a teenager at that time, was reduced to a state of sleepless disorientation, his lawyer Maj. David Frakt stated at the time.

Mental torture
Inmates in Gitmo have also been reportedly subjected to mental torture. During a court hearing in June 2016, a Somalian detainee and alleged al-Qaeda member Hassan Guleed, reaffirmed his earlier statement from 2004 that such tactics was applied to him in Gitmo’s Camp 7.

“We have mental torture in the Camp 7. In the [CIA] black site there was physical,” he told the judge.

He also described a constant “stinky smell” in his cell as well as regular vibrations and sound similar to “like someone on the roof… hitting a hammer.” Guleed claimed that he was not the only one to suffer such techniques, with a few other detainees, including the alleged 9/11 mastermind Khalid Sheikh Mohammad also having been subjected to the tactics.

Use of dogs to ‘scare’ inmates
Interrogators in Guantanamo have also resorted to the use of dogs to scare the detainees, an FBI investigation into alleged abuses of prisoners revealed. In fact, the inquiry claimed that after the technique appeared to be a success, it was later applied in other US prisons abroad, such as the infamous Abu Ghraib in Iraq.

“I still see the dogs in my dreams – that they are coming for me and are going to bite me,” an inmate later described his fears of the tactics upon arrival at Guantanamo.

Hunger strike and force feeding of inmates
Guantanamo is reported to have faced numerous hunger strikes by the inmates, and the largest such action started in 2013. The act of defiance is thought to have started in response to abrupt confiscation of personal items by the wardens – including towels, family photos, books and even religious CDs. It has been estimated that up to 166 prisoners took part in the hunger strike at its peak.