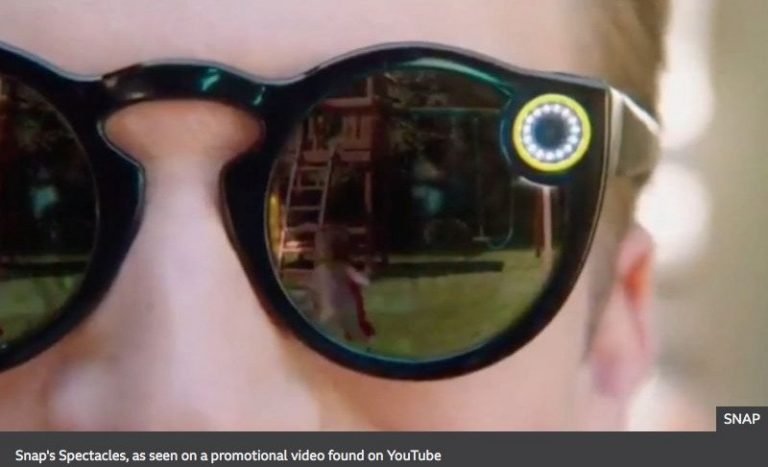 Excellent to film police when they act illegally.

The device, which the company is calling Spectacles, will go on sale later this year priced at $130 (£100).

The glasses will record up to 30 seconds of video at a time.

As part of the announcement, Snapchat is renaming itself Snap, Inc.

The renaming decision underlined the company’s apparent ambition to go beyond the ephemeral messaging app, a product which is highly popular with young people.

In an interview, Mr Spiegel explained his rationale for creating Spectacles.

“It was our first vacation, and we went to [Californian state park] Big Sur for a day or two. We were walking through the woods, stepping over logs, looking up at the beautiful trees.

“And when I got the footage back and watched it, I could see my own memory, through my own eyes – it was unbelievable.

“It’s one thing to see images of an experience you had, but it’s another thing to have an experience of the experience. It was the closest I’d ever come to feeling like I was there again.”

On Saturday, Snap released some limited information about how the glasses will work.

Footage will be recorded in a new, circular format which can be viewed in any orientation, the company said. The battery on the device will last about a day.

A light on the front of the device will indicate to people nearby when the glasses are recording.

Prior to confirmation from Snap about the product, news website Business Insider published a promotional video it found on YouTube showing the product. The video has since been taken down.

Broken Glass
Spectacles will remind many of Google Glass, an ill-fated attempt by the search giant to create smart glasses.

While Google Glass did get into the hands of developers around the world – at a cost of $1,500 each – the device never came close to being a consumer product. The company eventually halted development, but insisted the idea was not dead.

Though Glass was beset by hardware issues, perhaps its main flaw was the public perception. At worst, many saw it as troubling, privacy-invading technology. At best, others just considered it ridiculous-looking.

However, with a far lower price point, and likely adoption by influential celebrities, Snap’s Spectacles stand a solid chance of being seen as cooler than Google’s attempt.

“If you look at the kinds of glasses millennials wear, the design is very ‘in’,” suggested Carolina Milanesi, a consumer technology analyst from Creative Strategies.

“Making them sunglasses helps hide the camera better, but it also limits the usage somewhat – you’ll need to be outside in daylight.

She added: “The name change is interesting as it would indicate a change in focus away from messaging, which with Spectacles makes sense. Snap is perhaps becoming more about life-logging, content generation and story-telling.”

According to the WSJ, Snap is not treating the device as a major hardware launch, rather a fun toy that will have limited distribution.

“We’re going to take a slow approach to rolling them out,” Mr Spiegel told the newspaper.

“It’s about us figuring out if it fits into people’s lives and seeing how they like it.”