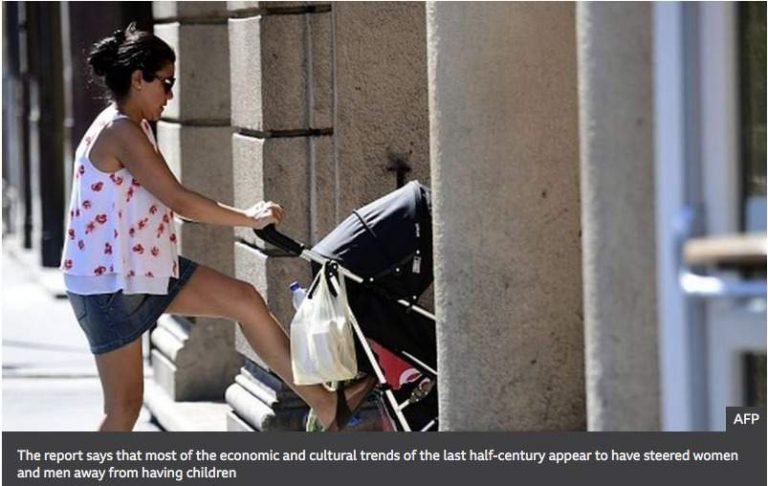 Wonderful news! Do not make babies! That’s the best way to fight overpopulation. This stupid explains the trend by “economic reason and uncertainty” but forget to name the best reason not to have babies: wisdom when overpopulation is killing Humanity, creating wars, and destroying the ecosystem! More and more women are aware of this and beautifully refuse to aggravate the problem. Having a baby is mainly an ego trip. When some Raelian women tell me they would like to have a baby, it’s usually because they feel useless and depressed. My advice is always: buy a cat or a dog! Having a baby is not a medicine for depression! And giving birth usually makes women more depressed. And creating a baby who will have to be raised by a depressed mother is a terrible act of selfishness. If you really want to take care of a child, adopt one! There are so many orphans! And like that, you will avoid the terrible ego trip of perpetuating YOUR genes. This ego trip is also a national ego trip, as rich nations push women to have more babies in order to fight the workforce aging problem while closing their borders to immigration. In other words, for example for France: make babies so our nation is populated by “real French” and let’s expel immigrants. That’s racist and nationalist supremacism. With open borders everywhere no need to make more babies. We are one race: Human beings from the Earth; which need to reduce its population.

Women in Europe are having fewer children, particularly in southern Europe, a French report has found.

More than a fifth of women born in the 1970s may remain childless, compared to an average of 15% in northern Europe and 18% in western Europe.

Factors including a precarious labour market and lack of family-friendly work policies help explain the rise in involuntary childlessness, it says.

But the report points out childlessness was also very high about a century ago.

Some 17-25% of women born in the first decade of the 20th Century remained childless, due to factors including the deaths of many men of marriageable age in the First World War, the emigration of other young men in poor countries, and the effects of the 1929 Great Depression.

Since then the average European childless trend, says France’s National Institute of Demographic Studies, has formed a U-shape.
Childlessness reached very low levels among women born in the 1930s and 1940s – the parents of the “baby boom” generation which enjoyed post-war prosperity such as low unemployment and generous state welfare systems.
In eastern Europe, the boom in births lasted longer than the west, the report says, bolstered by a lack of the contraception that was becoming available in the west.

The rise in childlessness is most marked in southern Europe, with rates surpassing 20% among women born in the early 1970s in Greece, Italy and Spain

In western Europe, childlessness was highest in Austria, Germany and Switzerland at about 20% of women born in 1968

Birth rates in Bulgaria, the Czech Republic and Russia are higher than other central and eastern European countries after the fall of communism in 1989-90. Only 8% of women born in these countries in 1968 remain childless, far below the European average of 14%

But childlessness began to rise among women born in the 1940s (in the west) and the 1960s (in the east) – due, the report says, to a complex combination of personal and external factors.

“Most of the economic and cultural trends of the last half-century appear to have steered women and men away from having children.

Very few women, it says, plan never to have children – instead, most end up “perpetually postponing parenthood” until it is too late.

The report cites high unemployment, “inadequate family policies” and “persistent gender inequalities in the division of domestic work and childcare” as important factors.

“While childlessness has broadly stabilised in western and northern Europe, it is likely to continue rising fast in southern Europe, where up to one quarter of women born in the 1970s may remain childless,” the report concludes.

“Childlessness will also continue rising in central and eastern Europe.”