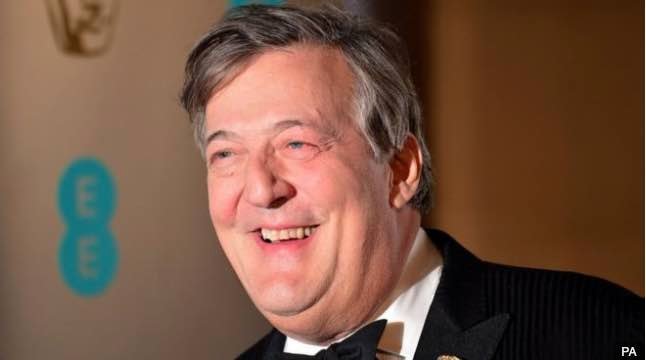 The right to blasphemy is a fundamental Human right and should be protected! As he brilliantly said, “How dare you create a world in which there is such misery? It’s not our fault? It’s not right. It’s utterly, utterly evil. Why should I respect a capricious, mean-minded, stupid god who creates a world which is so full of injustice and pain?”

Police in the Republic of Ireland have launched an investigation after a viewer claimed comments made by Stephen Fry on a TV show were blasphemous.

Officers are understood to be examining whether the British comedian committed a criminal offence under the Defamation Act when he appeared on RTE in 2015.

Fry had asked why he should “respect a capricious, mean-minded, stupid god who creates a world…. full of injustice”.

He later said he was not “offensive towards any particular religion”.

According to a report in the Irish Independent newspaper, no publicised cases of blasphemy have been brought before the courts since the law was introduced in 2009 and a source said it was “highly unlikely” that a prosecution against Fry would take place.

‘Such misery’
Appearing on The Meaning of Life, hosted by Gay Byrne, in February 2015, Fry had been asked what he might say to God at the gates of heaven.

Fry said: “How dare you create a world in which there is such misery? It’s not our fault? It’s not right. It’s utterly, utterly evil. Why should I respect a capricious, mean-minded, stupid god who creates a world which is so full of injustice and pain?”

He went on to say that Greek gods “didn’t present themselves as being all seeing, all wise, all beneficent”, adding “the god who created this universe, if it was created by god, is quite clearly a maniac, an utter maniac, totally selfish”.

The Irish Independent reported a member of the public made a complaint to police in Ennis in the same month the programme was broadcast. He was recently contacted by a detective to say they were looking into his complaint.

The viewer was not said to be offended himself but believed Fry’s comments qualified as blasphemy under the law, which carries a maximum penalty of a fine of 25,000 euros (£22,000).

The law prohibits people from publishing or uttering “matter that is grossly abusive or insulting in relation to matters held sacred by any religion, thereby causing outrage among a substantial number of the adherents of that religion”.

The government said at the time it was needed because the republic’s 1937 constitution gives only Christians legal protection of their beliefs.

‘Absolutely astonished’
Fry’s representatives have been contacted for a comment.

Speaking to the BBC in 2015, Fry said he had been “absolutely astonished” by some of the reaction on social media to what he had said on the show.

A police spokeswoman told the BBC: “We are not commenting on an ongoing investigation.”