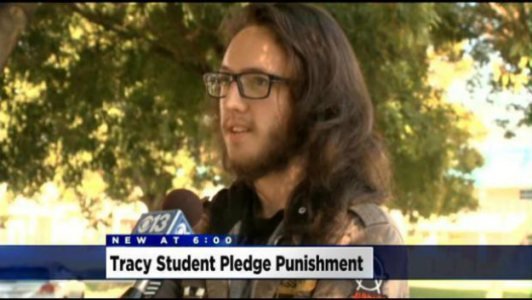 I decided to award him the title of Honorary Guide of Mankind as he is a perfect example of integrity and non compliance with discriminatory traditions.

A student in the Tracy Unified School District who refused to say the complete Pledge of Allegiance for a speech class assignment was sent to detention and docked points from his grade.

Officials in the Tracy Unified School District issued the punishment to Derek Giardina, a 17-year-old at West High School in central California after he failed to complete his speech class assignment.

Everyone in the speech class is required to lead the school 12 times in the 1954 version of the Pledge of Allegiance, but after reciting the full pledge the first two times, Giardina recently decided to omit “under God” because he’s an atheist, CBS reports.