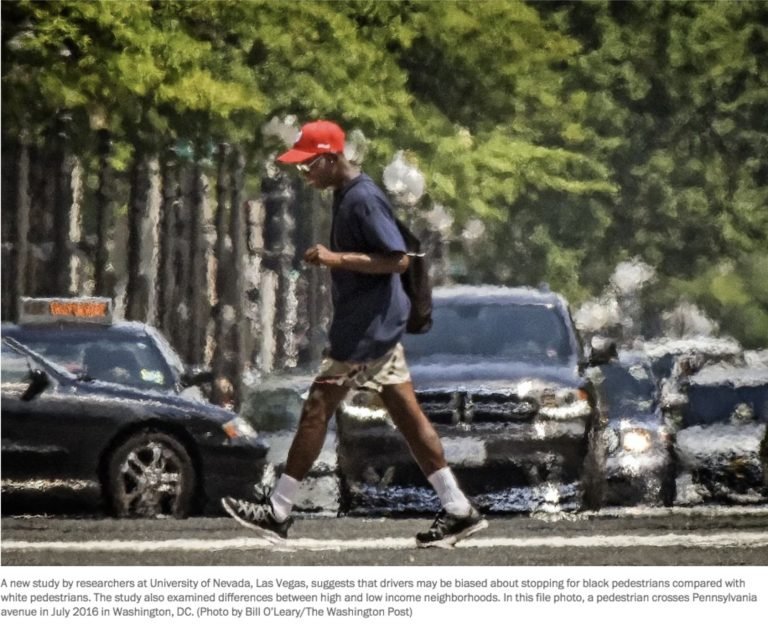 A new study appears to offer additional evidence that drivers are less likely to brake for African American pedestrians trying to cross the street, a phenomenon known as “walking while black.”

Researchers at the University of Nevada, Las Vegas also found that the disparity is greater depending on whether the pedestrian is in a high- or low-income neighborhood: the average number of vehicles to pass by a black pedestrian who was already in the crosswalk was at least seven times higher compared with a white pedestrian in the wealthier neighborhood, the study’s lead researcher said.

“Sadly, it wasn’t surprising,” said Courtney Coughenour, an assistant professor in the School of Community Health Sciences at the University of Nevada, Las Vegas.

But there are also several factors in the Las Vegas study that suggest the results should be interpreted with care.

In three scenarios that the researchers used, they found little statistically significant data to suggest a difference in the way motorists reacted to the pedestrian, whether black or white. In one of those, in fact, more cars passed the white pedestrian than the black pedestrian when they were waiting to step off the curb in the high-income neighborhood.

What’s more, the roadways between the high- and low-income neighborhoods differed in design, both in the number of lanes the pedestrian had to cross and the posted speed limit, as the study acknowledges. The researchers also noted, citing other research, that the disparity between yielding rates in the different neighborhoods could be explained by several factors,  such as people in high-income areas more often having private cars and driving more  compared to people in low-income neighborhoods, where there are also generally more pedestrians.

More than 4,700 pedestrians were killed in traffic crashes in 2013, according to the Centers for Disease Control and Prevention, citing the most recent figures available. The Las Vegas study, also citing CDC data, says fatality rates for black and Latino men are more than twice as high as for white men.