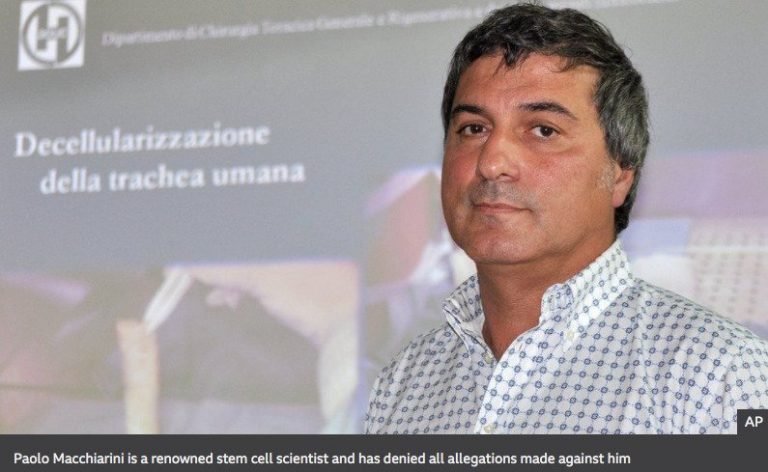 The judges of the panel which awarded the Nobel Peace Prize to war criminal Obama should also be fired.

Two judges have been asked to leave a panel that picks the Nobel prize for medicine in a scandal surrounding a disgraced Italian transplant surgeon.

The decision to drop Harriet Wallberg and Anders Hamsten came after the Swedish government sacked the entire board of the prestigious Karolinska Institute, where the scientist worked.

Paolo Macchiarini was seen as a leading specialist on windpipe transplants.

But two of his patients died and he was accused of falsifying his work record.

Dr Macchiarini denies all the charges against him.

The two judges who lost their positions on the Nobel panel have both served as heads of the Karolinska Institute, and were among several individuals suspected of ignoring warnings about the Italian windpipe scientist.

The case has come as a severe blow to the institute. In a report on the case on Monday, a former Swedish judge said he had “never seen such negative references” and questioned why the surgeon had been initially hired and then had his contract extended.

“Confidence in the two principals is so seriously damaged that it has been exhausted,” assembly secretary Thomas Perlmann told Sweden’s TT news agency.

“The damage is so great, and of such a character, that we will ask them to resign from the Nobel Assembly.”

The 50-member Nobel panel is due to announce the winner of the annual prize next month.

But he lost his job earlier this year after a TV documentary by Swedish broadcaster SVT showed footage of operations he carried out in Russia which the Karolinska Institute itself described as “truly alarming”.

Prosecutors in Sweden said in June they were investigating the stem cell surgeon on suspicion of two cases of involuntary manslaughter at Swedish hospitals in 2011 and 2012.

Other reports have alleged that he gave false information on his resume.