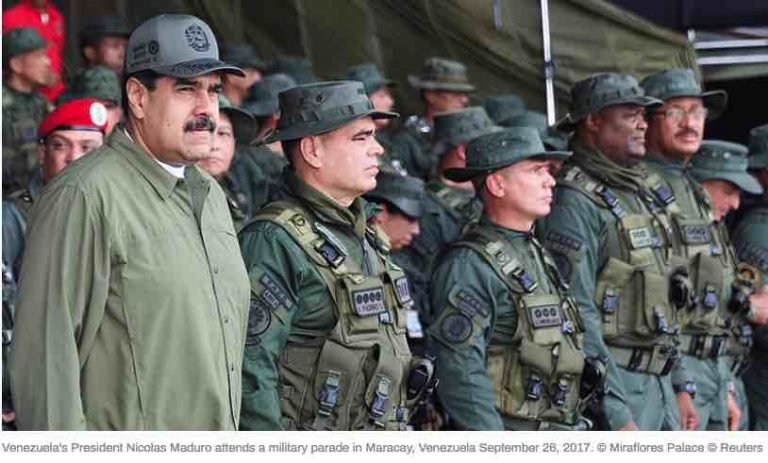 Absolutely right! He should offer Russia and China to have military bases in Venezuela to make sure the US is not attacking.

The president of Venezuela, Nicolas Maduro, has urged the national armed forces “be at ready” to defend the country’s sovereignty and people amid threats by US.

“We have been blatantly threatened by the most criminal empire in the history of mankind,” Maduro said, referring to the US.

The Venezuelan leader delivered a speech at the military parade held at the El Libertador air base in Aragua state in commemoration of the establishment of the Operational Strategic Command of the Venezuelan armed forces.

He went on to say that the Venezuelan Army has to guarantee the protection and “have the rifles, the missiles and the well-oiled tanks at the ready” to protect “every inch of the national territory.”

The future of humanity “cannot lie in the threats of nuclear strikes or military invasions,” the Venezuelan leader said in his speech on Tuesday. Instead, international relations should be based on “respect and solidarity.”

Maduro also said that his country “does not bomb anyone or interfere in the internal affairs of any country.”

The comments come amid a considerable low between the two countries. The tension peaked following the election of the Venezuelan Constituent Assembly in July. The US called the elections illegitimate, accusing the Venezuelan leadership of “undermined democracy.”

Even though the elections were held following months of street protests and clashes, over 8 million people participated in them, casting their votes for the 545 candidates tasked with drafting a new constitution. Amid the protests, Maduro as well as other officials claimed the unrest had been partly fueled by the US.

Following the polls, the US imposed several rounds of sanctions against Venezuela, particularly targeting the energy sector of the oil-rich country. Most recently, US President Donald Trump added the South American country to a new travel ban along with North Korea, citing a “terrorism threat.”

On Tuesday, Trump also called on the EU to join in imposing sanctions on the Maduro government. The US actions provoked an angry reaction in Venezuela, which called Washington’s move “political and psychological terrorism” and a new act of “aggression.”

Venezuela’s foreign minister, Jorge Arreaza, slammed Trump in a Twitter post, accusing him of “dedicating himself obsessively to attacking Venezuela” instead of addressing the needs of people in storm-stricken Puerto Rico.

He also criticized the US president for his “interventionist position and support for violent elements and extremists in Venezuela.”