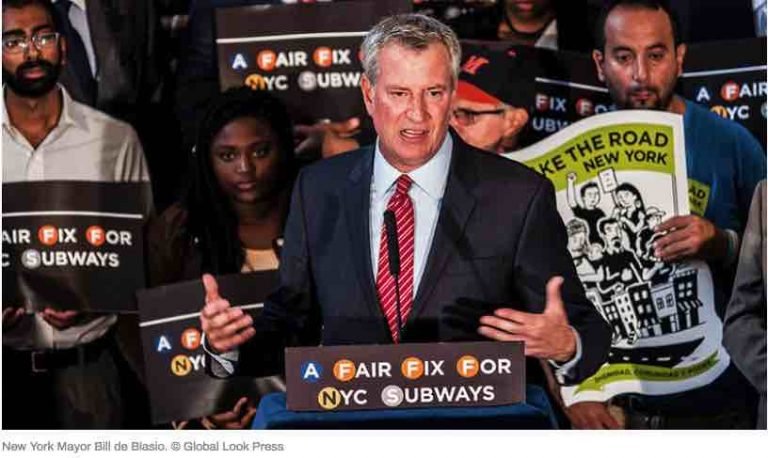 “It is a matter of fairness,” de Blasio said.

City officials estimate the tax would be paid by about 32,000 New York City tax filers, or less than 1 percent of those who file their taxes in the city.

The new tax rate would raise $700-$800 million a year for the Metropolitan Transportation Authority, with more than $500 million going towards capital costs for subways and buses, and about $250 million for the half-price MetroCard program, according to city officials.

The mayor’s proposal built on an effort by state Senator Mike Ginaris (D-Queens) to tax the wealthy to support the subway, and a campaign by transit activists to establish reduced fares for poor residents. He said the state and city have short-changed the MTA for years, and a temporary tax would generate about $2 billion.

“I would argue that the MTA is in a full-blown crisis and that would justify our return to Albany to enact this measure in an emergency session,” Ginaris told the New York Times.

Senate Republican spokesman Scott Reif said the city should not discuss raising taxes when it had a large surplus.

“With New York City sitting on a surplus that is north of $4 billion, the absolute last thing we should be talking about is raising taxes,” Reif said in a statement Sunday, according to NY1.“If the city wants to up its contribution to help shore up the subways for commuters and their families – which we support – it certainly has the means to do that.”

The funding push comes as New York transit faces a multitude of problems, from overcrowding, aging infrastructure, accidents and delays.

Joe Lhota, the chairman of the Metropolitan Transportation Authority, recently outlined a roughly $800 million emergency resource plan with a sweeping set of fixes that he vowed would turn around the steadily deteriorating service and called on the mayor for funding.

Lhota said the mayor should partner with him and match the state funding immediately to “turn the trains around.”

A two-month period of extensive repairs of signals and tracks at New York’s Penn Station, a major commuter hub for nearly 600,000 people, began in July.

In 2016, 3,000 delays and cancellations were caused by engineering work. New York Governor Andrew Cuomo had forecast the engineering repairs would cause a “summer of hell” for commuters.

The work was initially scheduled for nights and weekends over the course of several years, but two recent derailments and other problems spotlighted the station’s aging infrastructure, and convinced Amtrak to accelerate the schedule.

The infrastructure is struggling to handle an increase in riders as well. The number of commuters rose 10 percent between 2011 and 2016 to 89 million people per year, its highest since 1949, according LIRR President Patrick Nowakowski.

In response, the commuter rail network boosted the number of trains it runs 7.4 percent from 2011, bringing a total of 247,000 trains to the tracks.