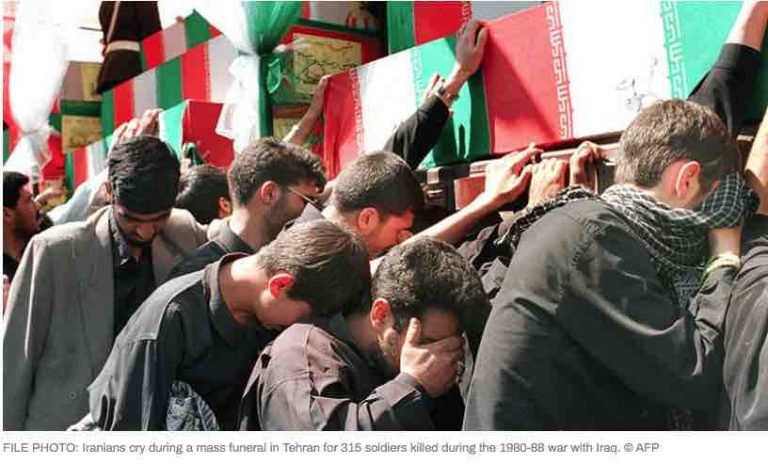 And they are absolutely right! And Japan should ask also compensation for the destruction of Hiroshima and Nagasaki by atomic bomb and so many other countries: Serbia, Afghanistan, Iraq, Libya, etc…

An Iranian court has issued a ruling demanding that the US pay $245 million to more than a dozen victims of chemical attacks carried out by Saddam Hussein’s forces during the Iran-Iraqi war of 1980-1988.

“A number of people who have been harmed during the chemical bombing have filed lawsuits and a court has issued decrees for 18 of them who have been harmed or died and estimated their [compensation],” Iran’s judiciary spokesman, Gholam Hossein Mohseni Eje’I, said on Sunday, as cited by the Fars news agency.

The war that began in 1980 and lasted eight years left an estimated 1 million people dead, according to Reuters.

Washington already knew about Iraqi chemical attacks in 1983, but took no action against the violations of international law, Foreign Policy reported, citing a classified memo.

“The Iraqis never told us that they intended to use nerve gas. They didn’t have to. We already knew,” retired Air Force Col. Rick Francona, who was a military attaché in Baghdad during the 1988 strikes, told Foreign Policy.

On June 28, 1987, Iraqi aircraft dropped mustard gas bombs on Sardasht, killing 110 people instantly and injuring as many as 12,000 civilians, according to Rudaw.

The Kurdish city in northwestern Iran became the first in the world to be gassed. Out of a population of 20,000, 25 percent are still suffering severe illnesses from the attacks, according to Global Security.org.

In the wake of the 30th anniversary of Saddam Hussein’s chemical attack against Sardasht, Iranian Foreign Minister Mohammad Javad Zarif lambasted the US for its perceived double-standard approach toward chemical weapons use.

“Those who are today claiming that chemical weapon has been used in Syria, in a suspicious and dangerous scenario, are those who not only ignored using the weapons of mass destruction (WMDs) and banned chemical weapons against the Iranian soldiers and civilians during the imposed war against this innocent but proud nation (Iran) but also were accomplices in Saddam’s crime by arming and all-out support for the criminal regime of Saddam,” Zarif said, as cited by Fars.

In April, US President Donald Trump ordered an airstrike on Syria’s Shayrat airbase, which was hit with 59 Tomahawk cruise missiles, following an alleged chemical attack in Idlib earlier that month which was blamed on the Assad government.

Syria’s foreign minister, Walid Muallem, dismissed allegations that the Syrian Army had deployed chemical weapons in Idlib, saying the military would never use such weapons against its own people or even terrorists. Muallem said an airstrike by the Syrian military had targeted an arms depot where chemical weapons stockpiles were stored by Islamic State (IS, formerly ISIS/ISIL) and Al-Nusra Front militants.