The Rockefellers and Rothschilds “fused” while no one was looking 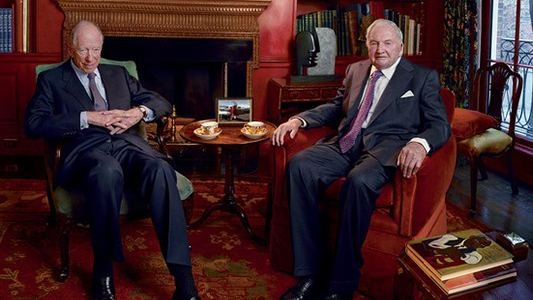 People prisoners of the illusion of ” democracy” accept from these new kings privileges a million times bigger that what pushed their ancestors to have a revolution against the French king. It’s time for a world revolution and the confiscation of their belonging and redistribution to poor people. That can only obtain if all the revolution forces of the world synchronize and centralize their efforts. Sadly, no revolution can be totally non violent.

Finally revealed by Vanity Fair and unbeknownst to everyone aside from insiders, the Rockefeller family and Rothschild family have merged as part of a secretive 2012 deal.

The Rockefellers (who changed their name from Rockenfelder before coming to the US in the 1800s) were founders of the Standard Oil Company in 1870 and a wealth-management firm in 1882 and have been influencing many walks of life for a long time. David Rockefeller (son of the notorious banker John D. Rockefeller) is the current patriarch of the Rockefeller family. It was revealed in his personal memoir; that David admitted to being “guilty” and “proud” of an “international conspiracy” against US sovereignty. We Are Change were one of the first to confront him about this admitted international manipulation: