The U.S. is retreating from religion 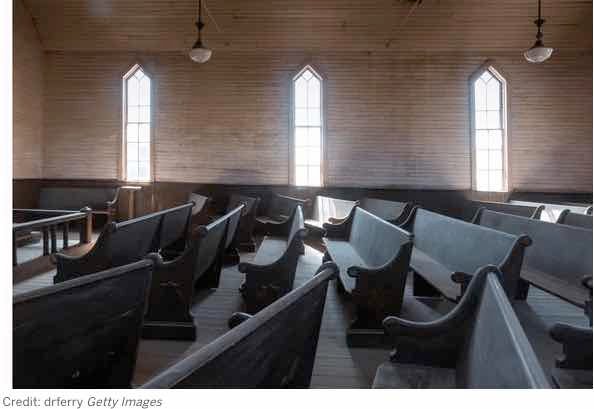 Since 1990, the fraction of Americans with no religious affiliation has nearly tripled, from about 8 percent to 22 percent. Over the next 20 years, this trend will accelerate: by 2020, there will be more of these “Nones” than Catholics, and by 2035, they will outnumber Protestants.

The following figure shows changes since 1972 and these predictions, based on data from the General Social Survey (GSS):

The GSS, which surveys 1,000–2,000 adults in the U.S. per year, includes questions related to religious beliefs and attitudes. Regarding religious affiliation, it asks “What is your religious preference: is it Protestant, Catholic, Jewish, some other religion, or no religion?”

In the figure, the dark lines show the fraction of respondents in each group for each year of the survey until 2016. The shaded areas show predictions, based on a statistical model of the relationship between year of birth, age, and religion.

Religious beliefs are primarily determined by the environment people grow up in, including their family life and wider social influences. Although some people change religious affiliation later in life, most do not, so changes in the population are largely due to generational replacement.

We can get a better view of generational changes if we group people by their year of birth, which captures information about the environment they grew up in, including the probability that they were raised in a religious tradition and their likely exposure to people of other religions. The following figure shows the share of people in each religious group, for birth years from 1880 to 1995:

However, this view of the data does not show the effect of age. If religious affiliation increases or decreases, on average, as people get older, this figure could be misleading.

Fortunately, with observations over more than 40 years, the design of the GSS makes it possible to build a statistical model that estimates the effects of birth year and age separately. Then we can use the model to generate predictions, by simulating the results of future surveys. The details of this methodology are in a longer version of this article (see links below).

ARE THESE PREDICTIONS CREDIBLE?
Social changes are generally unpredictable. At any point another “Great Awakening” could reverse these trends. But among social changes, demographic predictions are relatively safe; the events they predict have, in some sense, already happened. The people who will turn 40 years old in 2037 are turning 20 this year, and we already have data about them. The people who will turn 20 in 2037 have been or soon will be born. So these predictions will only be wrong if current teenagers are more religious than people in their 20s, or if current children are being raised in a more religious environment. But in both cases, the opposite is more likely to be true.

In fact, there are reasons to think these predictions are conservative:

1- Survey results like these are subject to social desirability bias, which is the tendency of respondents to shade their answers in the direction they think is more socially acceptable. To the degree that apostasy is stigmatized, we expect these reports to underestimate the number of Nones. As the visibility of nonreligious people increases, they might be more willing to be counted; in that case, the trends would go faster than predicted.

2- The trends for Protestants and Nones have apparent points of inflection near 1990. Predictions that include earlier data are likely to underestimate future trends. If we use only data since 1990 to generate predictions, we expect the fraction of Nones to exceed 40 percent within 20 years.