The US calling us terrorists is an honor 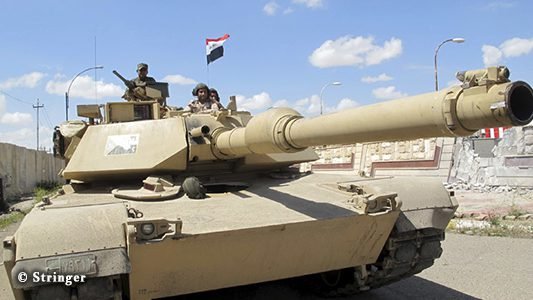 They are right! Those fighting the illegal invaders are always called “terrorists” by the occupying forces! French freedom fighters under German Nazi occupation in France were also called by Hitler forces “terrorists”. We must always remember that. But sending an atomic bomb on Hiroshima and Nagasaki, in order to terrorize the Japanese government: that is by definition a real act of terrorism.

On the 10th and final day in Iraq, I go and speak to the spokesman for Harakat Nujaba, Sayid Hashim Al Mousawi. Nujaba are led by Akram Al Kabi who the US considers a terrorist for his role in fighting US and UK troops during the 8-year occupation.

I’m driven to several locations and told to change cars each time before finally being driven to a compound in Baghdad, behind several layers of checkpoints manned by young fighters, no older than 21 or 22.

We go in and wait for Mousawi to arrive. He arrives after about 10 minutes, but even so apologizes for keeping us waiting.

Mousawi is a young man in his early 30s. His eyes betray his youthfulness and he is jovial and welcoming. He is one of the more interesting of the many people I have met during my journey. He is a cultured and educated man, quoting the first Shia leader Imam Ali (“People are either your brothers in religion or your equals in humanity”), along with Ghandi (“I learnt from Hussain how to attain victory while being oppressed”) and also, as he complained bitterly about the woes of his favorite team Real Madrid, Jose Mourinho (‘A team with Lionel Messi is unstoppable’).