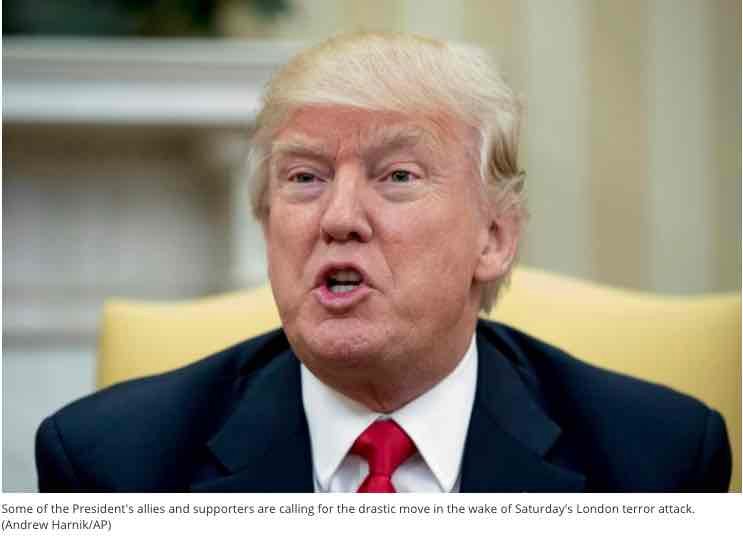 It will not be surprising if it happens: they did it with American citizens born from Japanese ancestors during WW II creating concentration camps for them… It’s time for all Arabic or Muslim Americans to leave the USA…

This is as disgusting as anything I’ve heard in my entire adult life. I’ve long since believed that Donald Trump and his staunchest supporters are bigots, but to hear some of them literally begin calling for Muslim internment camps is absolutely appalling.

To be clear, they are using the words “internment” and “internment camps” to describe how they want to “round up” thousands and thousands of Muslims. Of course, the calls for these internment camps came first on Fox News, but have now spread far beyond Fox.

This past Sunday, Trump ally Nigel Farage, who not only campaigned with Trump, but has appeared with Trump since the election, went on Fox and Friends Weekend the day after the recent attacks in London and said, “We want genuine action. And if there is not action, then the calls for internment will grow. We have over 3,000 people on a sort of known terrorist list, and we’re watching and monitoring their activities, but a further 20,000 people who are persons of interest, mainly they’re linked in some way to extremist organizations.”

The Fox hosts then circled back and asked Katie Hopkins, a regular guest, if she supported American-style internment camps used against Japanese Americans that Nigel Farage first mentioned. Without hesitation, Hopkins doubled down on the call for them, saying, “We do need internment camps. Before, I would’ve bought the idea that, no, this gets more people radicalized. You know, that’s not the solution. But we’ve gone beyond the tipping point.”

Clayton Morris, one of the show’s hosts, disavowed the calls for internment camps during the show, saying, “On behalf of the network, I think all of us here find that idea reprehensible here at Fox News Channel, just to be clear.”

Hearing the calls for internment camps got conservative talk show host Michael Savage’s juices flowing. Trump has repeatedly praised Savage and has appeared on his talk show over and over again. Savage, speaking not of England, but of the United States, said on Monday, “Why don’t you intern all of them before they run people over on a bridge, or stab people in the street? It was done during World War II.”

Again, Savage, like Katie Hopkins before him, has no reservations whatsoever comparing the internment camps to those of Japanese-Americans during World War II.

Others are joining in. An Irish model, Vogue Williams, wrote an op-ed in which the title is “Internment camps are grim necessity.” The British editor in chief of Brietbart (the company most recently overseen by White House Chief Strategist Steve Bannon) is now calling for internment camps.

These calls for internment camps of Muslims weren’t made at neo-Nazi rallies, they were made on national television, in widely distributed newspapers, and on syndicated radio shows by men and women who actually have the ear of the President of the United States. These horrifying calls for internment camps weren’t made by people with white hoods on their heads, but by truly influential men and women in business attire.

I’ve never heard such bigoted, terrifying calls for something so widely viewed as a human rights abuse made in broad daylight by so many people known to be allies of the President of the United States. These calls for internment camps represent a tremendous degradation in the discourse on terrorism around the world. And again, it’s not like these voices were calling for something different than the World War II-style internment camps of Japanese Americans — that was actually their reference point for how and why it must be done.

In a different day and age, any person who dared call for World War II-style internment camps would likely be yanked from the air and never allowed to speak on a public broadcast again, but in 2017 we are finding the lines for what’s permissible to be said in public have been erased. We have a president who openly bragged about grabbing women by the genitals. In other words, it appears we are now in the era where anything goes. How can these people be banned for wanting to revisit one of the worst periods of world history when our own president literally called for banning all Muslims from this country during his campaign and continues to fight for different versions of this ban today?

These calls, of course, are not about safety, but about bigotry. White supremacists are murdering Americans all over this country, but not a single Trump ally is calling for the internment of white people or even white supremacists — even though doing so may significantly reduce the number of terror attacks on American soil. Why not?

They aren’t calling for the internment of white people because maybe they might get swept up themselves in such an effort. If not Trump, or Farage, or Hopkins, or Savage, many of their most devoted supporters no doubt would be “rounded up” and sent to camps… so, no such calls have or will ever take place.