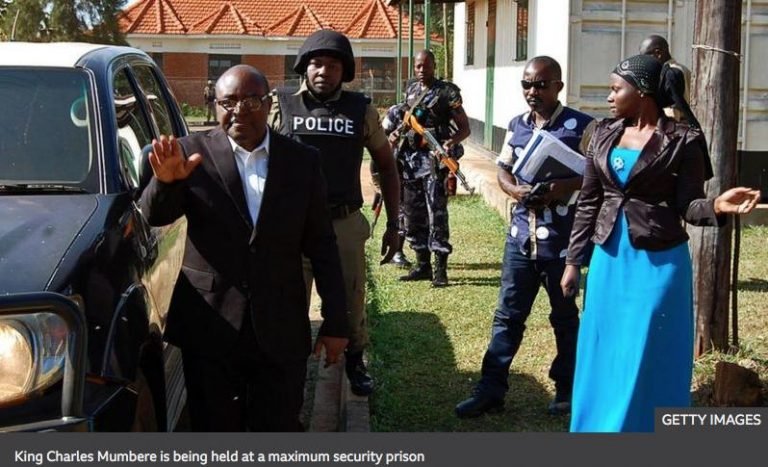 Of course, his kingdom should be independent of the colonization artificially created “state”, like all other kingdoms in Africa. No real decolonization will be accomplished as long as the puppet states created by Europeans will not be dismantled and return to original pre-colonization kingdoms borders, which respect real ethnic and languages separation; all these states being united in a Federation called United Kingdoms of Kama, and with its own pan-African money.

A Ugandan king facing terror charges should have a private cook and a small fridge in prison, a court has ordered.

Charles Mumbere, the king of Rwenzururu, is entitled to these privileges because he suffers from hypertension and diabetes, it added.

But prison authorities say an outsider will not be allowed into the prison to prepare his meals.

The king was arrested last month after a security force raid on his palace in western Uganda’s Kasese district.

More than 80 people were killed in the clashes.

The 64-year-old monarch denies any involvement in violence.

He was arrested with more than 150 people, including royal guards.

‘No plugs for fridge’

His lawyer, Caleb Alaka, told the BBC he will ensure that prison officials comply with the court order.

Mr Alaka said he initially thought there was a royal cook among those arrested but they had all “perished” during the raid on the palace.

The monarch would accept a cook appointed by prison authorities, he added.

Officials also said there were no plugs in the cells to power fridges, local media reports.

But Mr Alaka told the BBC the king’s medication must be “kept under a certain temperature”.

He was prepared to install a plug in the monarch’s cell so that he can have a fridge, Mr Alaka added.

The king is being held at the Luzira Maximum Security Prison in the capital, Kampala.

It is not clear whether the terrorism charges relate to the recent clashes or to separate charges over the murder of a police officer in March.

He has not yet been asked to plead and is due to appear in court again on 28 March.

The government has accused the Rwenzururu kingdom in Kasese district of recruiting and training militants that are seeking secession from the rest of Uganda to create their own republic, to be called Yira.

The region, which lies on the border with the Democratic Republic of Congo, has been plagued by clashes between the army and armed groups, which have claimed dozens of lives in recent months, including members of the armed forces and civilians.

Before becoming king, Mr Mumbere spent many years living in the US, where he worked in a Pennsylvania nursing home.