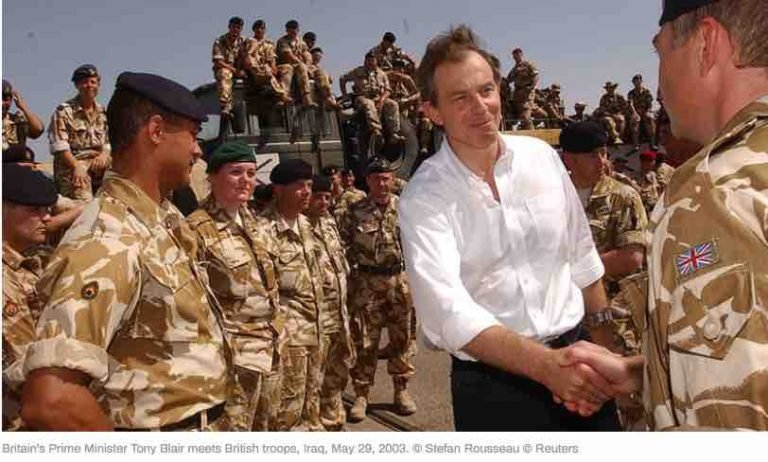 Of course, he should be prosecuted and jailed.

UK Attorney General Jeremy Wright QC is prepared to go to court to demand that former Prime Minister Tony Blair not be prosecuted over the Iraq war, according to a report.

The planned move by the attorney general follows a judge’s ruling last year that Blair has immunity from criminal charges over Iraq, and that pursuing a prosecution could “involve details being disclosed under the Official Secrets Act,” the Guardian reported.

The private prosecution concerns the 2003 invasion of Iraq, seeking the trial of then-Prime Minister Blair, then-Foreign Secretary Jack Straw, and then-Attorney General Lord Goldsmith for the crime of “aggression,” the newspaper reported.

Legal documents seen by the Guardian show that Jeremy Wright formally asked to join future hearings, and for the bid to prosecute Blair and his top aides to be rejected.

A spokesperson for Wright told The Press Association: “It’s not unusual for the attorney general to intervene in cases in order to represent the public interest. He has sought to intervene in this case because it raises important issues about the scope of the criminal law.” According to the Guardian, the private prosecution is based on the findings of the Chilcot report into the UK decision to join the invasion of Iraq. Britain undertook its role in the invasion before peaceful options for disarmament had been exhausted, and military action was “not a last resort,” the Chilcot Inquiry found, among other things. The report also said that then-Prime Minister Tony Blair deliberately exaggerated the threat posed by the Iraqi regime as he sought to make the case for military action to MPs and the public. Blair disregarded warnings about the potential consequences of military action and relied too heavily on his own beliefs, Chilcot noted.

The attorney general allegedly claims the case is hopeless, since the crime of aggression, which exists in international law, does not exist in English law.

However, in a March 7, 2003 memo on the legality of the Iraq War, then-Attorney General Goldsmith actually acknowledged the key point of those now calling for his prosecution. “Aggression is a crime under customary international law which automatically forms part of domestic law,” Goldsmith wrote. “It might therefore be argued that international aggression is a crime recognised by the common law which can be prosecuted in the UK courts,” he added.

The Chilcot report, released in July of last year, was the culmination of seven years of investigation, started by then-Prime Minister Gordon Brown in 2009, and chaired by Sir John Chilcot. Although the investigation had found that Saddam Hussein had not posed any credible threat to the West – nor were there any WMD in his possession – it stopped short of assigning any blame to Tony Blair or any officials in his government. According to memos obtained under the Freedom of Information Act (FIA), officials “at the highest levels of government” were involved in driving the inquiry to that outcome.

“The inquiry was hobbled before it even started, with tight restrictions on what it could do that were not fully made public,” Chris Lamb, an FOI campaigner from Bristol, told the Observer in November.

After the publication of the Chilcot report, some family members of British service personnel killed in the Iraq War called for Blair to face criminal charges.

In February, lawyers acting for the families voiced fears that the Supreme Court’s Article 50 Brexit ruling could affect their case against Blair, and launched a fundraising bid to pay constitutional lawyers to look into the issue.