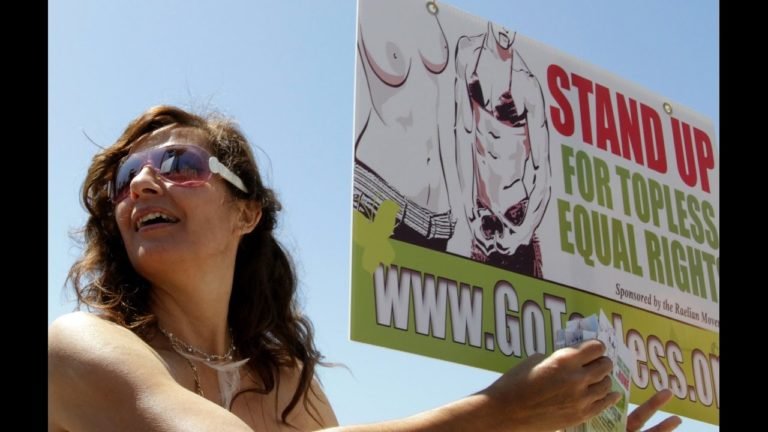 It’s time for Facebook to review their policies. If not, GoTopless should sue Facebook in US courts.

Feminists in America are celebrating a small victory with one federal judge ruling that women should be able to expose their breasts in public, giving them the same rights as men. For years women have campaigned against the apparent unfair ruling that men are allowed to be topless in public spaces, but for women this is considered a criminal offence – highlighting the sexism of the situation. Female nudity is treated in such a different way to male nudity all over the world, with the female body often being sexualized out of context. In highly religious places such as parts of Africa and the Middle East females are persecuted and put to death for exposing parts of their body that are considered immodest such as the legs or even hair.

The Feminist group behind the new ruling are called ‘Free the Nipple’, formed in 2012 they have been tirelessly campaigning for equal rights for men and women. When The Municipality of Fort Collins in the state of Colorado passed the law in November 2015 the group were quick to act. The ruling was passed in the first instance due to the fact that the exposing of female breasts in public often ‘disrupts public order’.

Fort Collins women are now free to walk down the street without a shirt on — not that they necessarily plan to. U.S. District Court Judge R. Brooke Jackson granted an injunction Wednesday halting a Fort Collins ordinance that prohibited women from showing their breasts in public, saying it discriminated against women and perpetuated stereotypes that sexualized female breasts.

“I find that the ordinance discriminates against women based on the generalized notion that, regardless of a woman’s intent, the exposure of her breasts in public (or even in her private home if viewable by the public) is necessarily a sexualized act,” Jackson wrote. “Thus, it perpetuates a stereotype engrained in our society that female breasts are primarily objects of sexual desire whereas male breasts are not.” Although the case has not been finished, Jackson wrote that he would grant the injunction in part because he believes he will ultimately find that the ordinance violates the Equal Protection Clause. City attorney Carrie Daggett said in a statement that the city will review the judge’s decision and consider its next steps. “While the Judge has acknowledged the other cases upholding similar laws, he concluded he is likely to find the city’s restriction on female toplessness in public is based on an impermissible gender stereotype that results in a form of gender-based discrimination,” she said. “It makes great sense,” he said. “Any statute that has the words in it ‘Women are prohibited from’ is almost certainly unconstitutional.”

On Nov. 3, 2015, the city enacted an ordinance that prohibited females 10 or older from exposing their breasts from below the top of the areola in public or on private property if that place can be viewed by someone on public property. This ordinance exempted women who were breastfeeding. Someone who violated the ordinance could be fined up to $2,650 or imprisoned for 180 days. Free the Nipple, an association of Colorado residents who advocate for gender equality, its founder Brittiany Hoagland and member Samantha Six filed for a preliminary injunction on May 31, alleging that the public nudity ordinance was one of the most restrictive in the nation. In his decision, Jackson ruled against the city’s claims that law maintained public order and protected children. He also ruled against their contention that the order did not discriminate because male and female breasts are different, therefore do not raise an equal protection issue. The primary difference between male and female breasts is the ability to breastfeed. Beyond that, an expert testified in court that breasts are similarly situated. The court noted physical differences but said that was not enough to warrant different treatment from the government.

Jackson wrote that the mere sight of a female breast does not endanger children because — due to breastfeeding — it is one of the first things a child sees. Additionally, a child of any age might see a woman’s breast while she is breastfeeding, which is allowed by the ordinance, but no one has suggested that they are harmed by that experience. “It seems, then, that children do not need to be protected from the naked female breast itself but from the negative societal norms, expectations, and stereotypes associated with it,” he wrote.

A law that allows women to show their breasts in public would not have a significant negative impact on the public, Jackson wrote. “Frankly, even if this ordinance were not on the books I doubt that women would be regularly walking through downtown Fort Collins with their breasts exposed, or parading in front of elementary schools, or swimming topless in the public pool, as defendant cautioned us during the hearing,” he wrote. “As with many other legal behaviors, common sense and sensitivity to the feelings of others tells us that there is a time and a place,” he continued. “It seems to me that the primary focus here is the equal right of women to expose their breasts in public, not necessarily a plan to make it an everyday, everywhere routine.”

He recognized that his decision to strike down the law would upset many Fort Collins residents. Although he said stopping women from showing their breasts may be a significant issue of personal morality, he ruled that those concerns are outweighed by the constitutional rights of others. “Unfortunately, our history is littered with many forms of discrimination, including discrimination against women,” he wrote. “As the barriers have come down, one by one, some people were made uncomfortable. In our system, however, the Constitution prevails over popular sentiment.”