Walmart boss earns 1,200 times as much as the company’s median worker 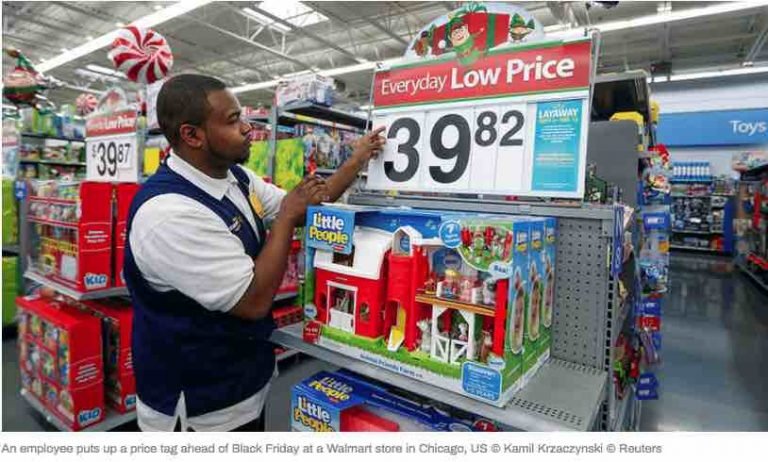 Capitalism at its worst!

The salaries of CEOs have ballooned over the past 50 years, extending huge gaps with those of their employees. Today, so-called ‘fat cats’ can earn the annual salary of a typical worker by lunchtime.

The largest chunk of McMillon’s compensation came in the form of stock awards. He has held the company’s top job since 2014.

Walmart, which is the largest private-sector employer in the US, has around 2.3 million global employees, including full-time and part-time workers.

The company’s spokesperson Randy Hargrove said that, in the past few years, Walmart has made important investments in its workers, including raising its minimum wage in the US to $11 an hour in February. The retailer says it has also put money into training and education programs for employees.

US companies have recently had to release CEO pay ratios for the first time. The move is newly mandated under a provision of the Dodd-Frank financial reforms passed during the Obama administration.

The released information showed that at Macy’s, the CEO earned $11.1 million in the last fiscal year, which is 806 times the salary of a median employee. GAP’s chief executive made $15.6 million, or 2,900 times more than the median employee.

Research conducted last year by the executive data firm Equilar for the Associated Press (AP), showed that CEOs of America’s top corporations got their biggest rise since 2013. According to the report, over the last five years, median CEO pay has jumped by 19.6 percent, not accounting for inflation. That’s nearly double the 10.9 percent rise in the average weekly paycheck for full-time employees across the country.