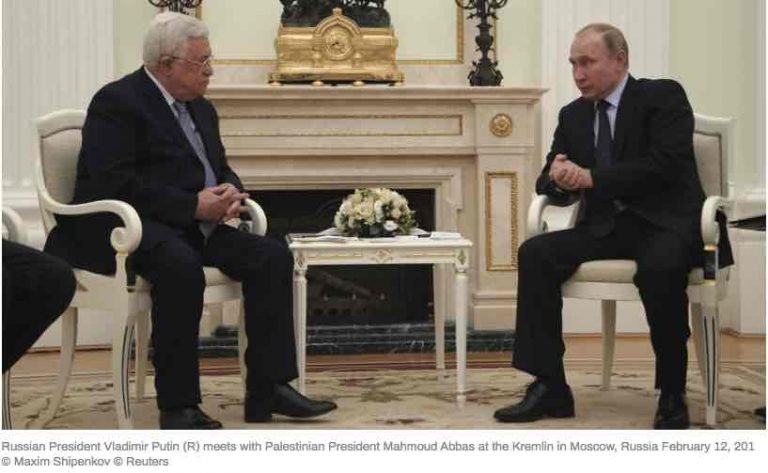 A very good move. How can the US, who give billions every year and is governed by a Jewish Israelian lobby, be an impartial mediator? Russia is much more neutral.

It is no secret that Palestinian trust in Washington as an impartial broker and mediator in future peace talks with Israel has been shredded.

And given the Trump administration’s reckless, not to mention illegal, decision to declare Washington’s recognition of Jerusalem as Israel’s capital in December 2017, who can blame them?

This historic rupture with Washington on the part of the Palestinian Authority was articulated by President Mahmoud Abbas, at the start of talks with Russian President Vladimir Putin and Foreign Minister Sergey Lavrov in Moscow.

“We [the Palestinians] state that from now on we refuse to cooperate in any form with the US in its status of a mediator, as we stand against its actions,” he said.

With these sentiments, the Palestinian leader provides more evidence of damage to Washington’s moral standing and political authority in the Middle East due to the actions of the Trump administration. Consequently, it is to Moscow that Abbas and the Palestinians are now looking to help mediate future diplomatic initiatives with Israel.

Of course, no one with even the most basic understanding the tortuous history of the Palestinian struggle for justice will have been under any illusions when it comes to Washington’s bias in favor of its close ally Israel when it comes to this issue. However, President Trump has removed even the patina of impartiality that Washington had sought to maintain, deciding for transparently domestic reasons to go where no previous US president had dared go in acceding to the likewise-domestic agenda of Israel’s Prime Minister Benjamin Netanyahu in recognizing Jerusalem as the country’s capital city.

With Netanyahu now on the verge of being indicted in Israel on corruption charges, perhaps we gain a deeper understanding of not only the domestic context in which the recognition of Jerusalem was so crucial to him in December, while the police investigation into these corruption allegations was ongoing, but also Israel’s aggressive posture in Syria of late.

None of this, of course, does anything to alleviate the plight of the Palestinians, whose rights continue to be negated on a daily basis by Israel in the form of its illegal occupation of the West Bank, the expansion of illegal settlements in the West Bank and East Jerusalem, along with the siege of Gaza, which falls under the category of collective punishment.
It should be noted that the Palestinians still foresee a role for the US in future talks and peace initiatives, but from now only on a multilateral basis in conjunction with Russia, along with, it is to be presumed, the EU and the UN with the region. The involvement of the UN in future talks is especially necessary, despite its authority of having been consistently subverted by Washington and Israel of late.

Regardless, it would be folly for either to believe that there is any scope for a unilateral or bilateral approach when it comes to resolving this issue. Illusions of this sort will only succeed in dragging the world back to 19th-century colonial and imperialist norms, and would be disastrous for stability, peace and the security of all.

When it comes to the pressing matter of where we are and the challenge of navigating towards any kind of workable resolution that can satisfy the Palestinians’ righteous demand for justice and Israel’s need for security, along with the overall stability of the region upon which both depends, we encounter the salient truth that only the strong can compromise and only equals can reach agreement.

Clearly, in a perfect world international law would be equally applied and equally respected by all states and nations no matter the size of the economy, military might or historical weight said state or nation enjoys. But such a perfect world is not the one we live in.

The challenge then lies in persuading Israel that justice for the Palestinians, which is now long overdue, is also in its own strategic and security interests, regardless of the self-evident morality involved.

Oppression breeds resistance, and by any objective measure the Palestinians are an oppressed people. If history proves anything it is that until those who are oppressed are free, neither will those who oppress them be free.