‘We don’t want US in Afghanistan!’ Locals vent anger after family of 14 killed in airstrike 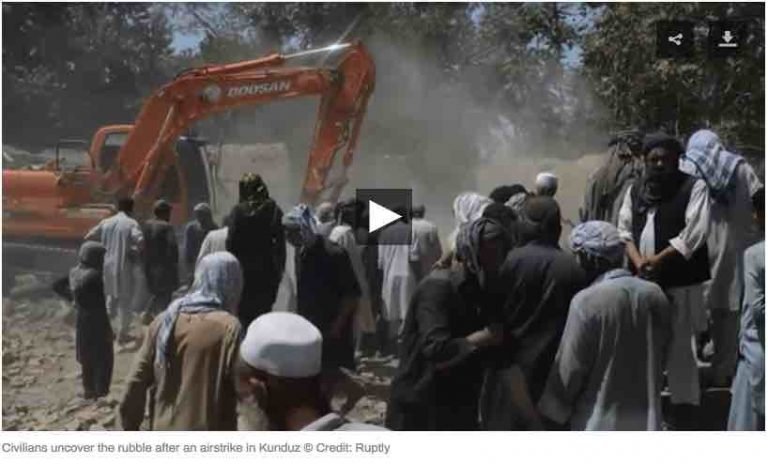 An airstrike killed a number of Afghan civilians in the Kunduz province, where a family of 14 perished in the bombing. Local authorities said no one warned civilians about the coming strike.

RT’s Ruptly agency have filmed bombed-out houses in Chahar Dara district, Kunduz province, that was hit by a Thursday airstrike Afghan authorities claim was carried out by the US-led coalition. Footage shows a digger sifting through the debris at the site of the airstrike, where 14 civilians, all said to be family members, had died.

Omerkhel, a local resident, described the scene, saying “their families are under the earth, the machine is working to get them out of the damaged places.” He added victims of the bombing were women and children.

Another man emotionally said: “They do not allow Afghanistan to be safe; we don’t want America in Afghanistan any more. Look at this child’s leg, what is his sin?”

Local authorities say the airstrike came unannounced, and accused the coalition of failing to warn civilians in advance. Zalmai Farooqi, Governor of the Chahar Dara District of the Kunduz Province, lamented not having been informed of the airstrike before it took place.

“No one was informed, neither the national army – not even the police and ourselves. If they don’t [inform us] then we cannot manage to inform the people,” he explained.

Ruptly has reached out to the NATO-led International Security Assistance Force (ISAF) for comment. It responded by saying that the US has carried out air strikes “in support of Afghan-led ground operations” and that “an on-the-ground assessment of those strikes revealed no indications they caused civilian casualties.” It also said that the Afghan Defence Ministry is conducting an investigation.

Afghanistan’s Ministry of Defense said on Friday the civilians were killed during a “joint operation” by local and coalition forces, according to TOLO News. It said an investigation team will be dispatched to learn about identity of the pilot who conducted the bombing.

UN had recently estimated that the number of civilians killed in Afghanistan in the first six months of 2018 has hit a record high despite a ceasefire put in place in June. The UN Assistance Mission in Afghanistan (UNAMA) said a total of 1,692 civilians have been killed this year so far, the most recorded in the same time period since records began in 2009.