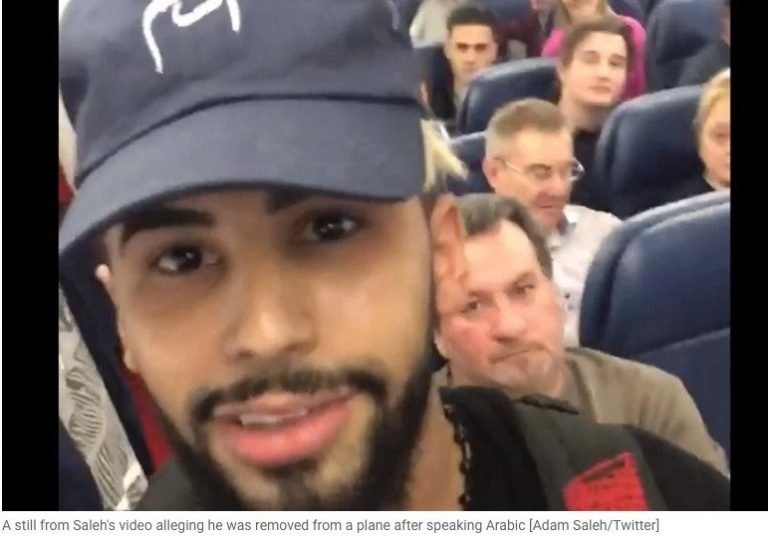 YouTube star Adam Saleh says he was forced off New York-bound plane with a friend after speaking Arabic on the phone.

Delta Air Lines removed a Muslim American social media star and his friend from a New York-bound plane in London, but the airline and the two passengers have given conflicting accounts of the incident.

In a statement early on Thursday, after Delta Flight 1 landed in New York, Delta said Adam Saleh and his friend Slim Albaher were removed because they “sought to disrupt the cabin with provocative behaviour, including shouting”.

The airline said its information was based on statements collected from the flight crew and other passengers.

Saleh posted video of the incident on Wednesday to his Twitter feed, though it was unclear what took place before the recording started.

“Delta airlines kicked us out for speaking Arabic to my mom on a plane,” Saleh tweeted.

By the time of publishing, a recorded clip he posted had been shared more than 750,000 times.

Addressing one of his fellow passengers, he can be seen saying: “I spoke a word [of Arabic], and you said you feel uncomfortable?”

Saleh said that they were later placed on another flight, having been re-checked by security.

Saleh is a YouTube star, with more than 1.5 million subscribers. Many of his videos feature him carrying out practical jokes.

The airline said it had launched a review “to understand what happened”.

In a final message before taking off, Saleh told his 257,000 Twitter followers that he would be visiting his lawyer when he arrives in New York, apparently over the incident that had just taken place.

Several people have been removed from planes over the past two years.

In August, Delta removed a Muslim couple travelling from Paris to Cincinnati after a member of staff complained of feeling uncomfortable with them on board.

Also in August, British Muslim siblings were removed from an easyJet plane travelling from London to Naples after fellow passengers accused them of being members of the Islamic State of Iraq and the Levant group.

In November 2015, an American Muslim cited Islamophobia after being removed from a Lufthansa plane from Newark Liberty International Airport to Istanbul for further questioning.

Ibrahim Hooper, a spokesman for the Council on American Relations, told Al Jazeera that the civil rights group was “reaching out to all parties” to investigate Wednesday’s incident involving Saleh.

“We’re very concerned about reports of this kind. If the allegations are true, they fit a pattern of these kinds of incidents over the years,” he said.

He said “everybody just needs to use their common sense” when it comes to security.

“Despite world events, the world is a diverse place where people speak different languages, wear different attire and look different. That’s not justification for removing someone from a plane.”