“We’ll never have peace”: Philippines leader Duterte wants to boot US troops out of country’s south 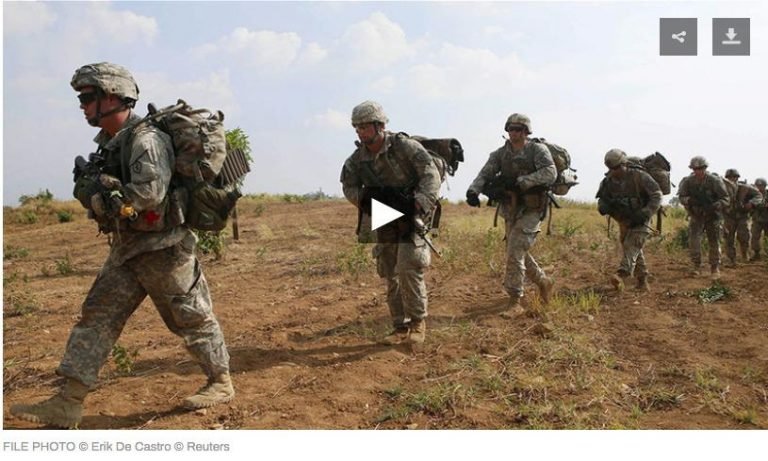 Yes! Yankees go home! And from everywhere around the world!

The Philippines president says US troops “have to go” from the south of his country. He blames American soldiers for inflaming tensions with the local Muslim population, saying they would “never have peace” with a US military presence.

Philippines President Rodrigo Duterte says he is opposed to US soldiers being stationed in the southern Mindanao region, recalling how American troops took part in a pacification plan against Muslim Filipinos going back over a century. He said that this has caused a long period of resentment from the minority Muslim population against a majority of Catholics in the south.

“For as long as we stay with America, we will never have peace in that land,” Duterte said on Monday, as cited by the AP.

He displayed some black and white photographs dating from the early 1900s that showed women and children that had been killed by US forces.

He also warned that US troops would face difficulties if they decided not to heed his advice and leave.

“If they see Americans, they’ll really kill them. They’ll get ransom and then kill you, even if you are a black or a white American as long as you’re an American,” he said.

Despite the bold declaration of his intention to kick the US military out of the south of the Philippines, Duterte did not say how this would be achieved or give a timeframe within which this might happen.

Washington did not receive an official demand from the Philippine government with regards to the matter, US State Department spokesman John Kirby told a news conference when asked about the statement made by Duterte, Reuters reported.

He stressed that the US remains committed to its alliance with Manila but is “not aware of any official communication by the Philippine government … to seek that result.”

Joseph Cheng, a political analyst from Hong Kong City University, told RT that he believes President Duterte is playing to segments of Philippine society that want US troops to leave the country for good.

“It seems he is trying to gain popularity and gain support through a popular nationalist stand, on the other hand it appears that he does not want to depend too much on the United States for the country’s security in contrast to his predecessor,” he said.

Cheng added that provoking a series of disputes with the United States could be a calculated move on Duterte’s part to bring about a warming in relations with neighboring China.

“He probably wants to initiate negotiations with Beijing on the territorial dispute, with the intention of improving economic ties between the two countries, as well as perhaps seeking economic aid from Beijing,” he told RT.

US soldiers were stationed in Mindanao in 2002 to train and advise local government forces that were fighting Abu Sayyaf militants with links to Al-Qaeda. While the majority of the US military presence withdrew in 2015, US officials said that some troops have remained in an advisory role.

Since being elected to office in June, Duterte has had an uneasy relationship with Washington. The Philippine president has been particularly annoyed at what he perceives as lecturing from the US about human rights abuses, which have followed his brutal crackdown on drugs and traffickers in the country.

The Philippine National Police (PNP) says that it has killed 1,466 suspected drug offenders so far, while another 1,490 have been killed by suspected vigilante groups, which the PNP classifies as “deaths under investigation.”

“The number of (police) operations conducted since the launching of Oplan Double Barrel has already reached 17,389, resulting in the deaths of 1,466 drug personalities and the arrest of 16,025 drug suspects,” PNP spokesman Senior Superintendent Dionardo Carlos said on Sunday, according to the Philippine Star publication.

President Barack Obama snubbed a possible meeting with Duterte at the recent G20 Summit in China after the Philippine leader called him a “Son of a b****.”

“I was ready [for Obama]. I was waiting for Obama to respond. Lawyer to lawyer, we are both lawyers anyway… I said I never made the statement. Check it out,” he said, adding that “…I said that, but not in relation to Obama… I’m not fighting with America.”