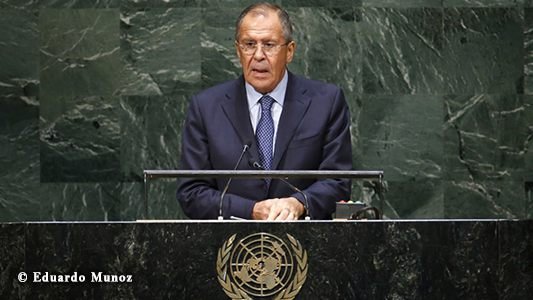 Time to dismantle the United Nations Organization, which is a puppet of western neo colonialism and imperialism.

The US-led Western block rejects the principle of the equality of sovereign states secured by the UN Charter while advocating democracy in the international arena, said Russian Foreign Minister Sergey Lavrov addressing the UNGA.

“The US-led Western alliance, while acting as an advocate of democracy, rule of law and human rights in individual countries, is acting in the international arena from the opposite position, rejecting the democratic principle of the sovereign right of states enshrined in the UN Charter and trying to decide for others what is good and what is bad,” Lavrov said at the 69th session of the UN General Assembly in New York on Saturday.

The Russian foreign minister elaborated that there was an “increasingly obvious contradiction between the need for collective action by partners to produce proper responses to common challenges and some countries’ drive for dominance and revival of the archaic bloc mentality based on barrack-like discipline and flawed ‘us and them’ logic”.

Lavrov added that Russia was willing to compromise and ready to balance interests only based on mutual respect and if the dialogue is “honest, respectful and equal”.