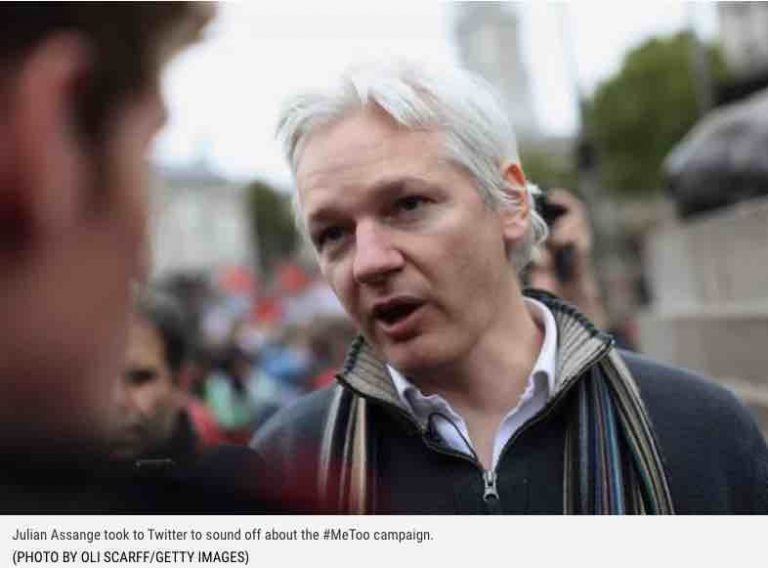 A terrible world where media accusations are taken for the truth without any decision of justice. If he is finally declared innocent by a court of Justice then all these stupid women will have to apologize if they wish to be able to sleep at night.

Julian Assange, the whistleblower once accused of rape, compared the men accused by sexual assault victims in the #MeToo campaign to black men being lynched after being wrongly accused of raping white women.

Assange posted on Twitter asking how women posting with the #MeToo hashtag would have reacted back when the lynching of black men accused of sexual misconduct against white women was a common occurrence.

“All I can say is thank god the Twittermob wasn’t around in the Old South: there would have been a hell of a lot more black men swinging from trees as tweeters said: ‘I believe the woman. He’s definitely a rapist. #metoo,'” Assange tweeted.

Many people called out the founder of WikiLeaks for his tweet, with some reminding him that he was accused of rape and molestation in two incidents in 2010.

“Is that why you’re hiding in a cupboard from being questioned on sex abuse allegations?” said Twitter user Art Steventon. “You have zero agency on this subject.”

Other users called the tweet a disgusting analogy, with some saying Assange wants rape victims to keep quiet.

The #MeToo campaign, started by Tarana Burke, went viral on social media when actress Alyssa Milano posted a tweet urging women to come forward with their stories of sexual harassment. The post came after scores of women in Hollywood accused now-disgraced movie executive Harvey Weinstein of sexual harassment and rape.

Assange followed his tweet with another post on Saturday that also didn’t sit well with social media. He said he wanted to let women in on a “male secret”: that men who call themselves feminists are “predatory sleaze bags.”

The post was an apparent reference to Weinstein, who was known for contributing to causes that supported women’s equality despite his long history of allegedly abusing them.

Assange linked to a story about a retired Swedish police chief who had tried to end sexism in the police force but was also accused of sex trafficking and rape. Assange compared the chief to Weinstein.

Social media users began to poke fun at Assange for his “male secret comment,” with some arguing that Assange was trying to dissuade men from becoming feminists.

Assange has spent nearly seven years living in the embassy after the accusations of sexual harassment were aired. Assange tried to clear his name in 2016 when he claimed the sex with the woman accusing him of rape was “entirely innocent” and consensual.

After Swedish authorities dropped the rape charge, his lawyers said in May that he would stay at the embassy until it was clear whether or not the U.S. would extradite him for leaking classified military information.

Assange’s lawyer Melinda Taylor previously told Newsweek that her client would remain in the embassy until “the ongoing national security prosecution in the United States” had ended.

WikiLeaks then released a statement in May on Assange’s stay in the embassy.

“UK refuses to confirm or deny whether it has already received a US extradition warrant for Julian Assange. Focus now moves to UK,” the group said in a tweet.