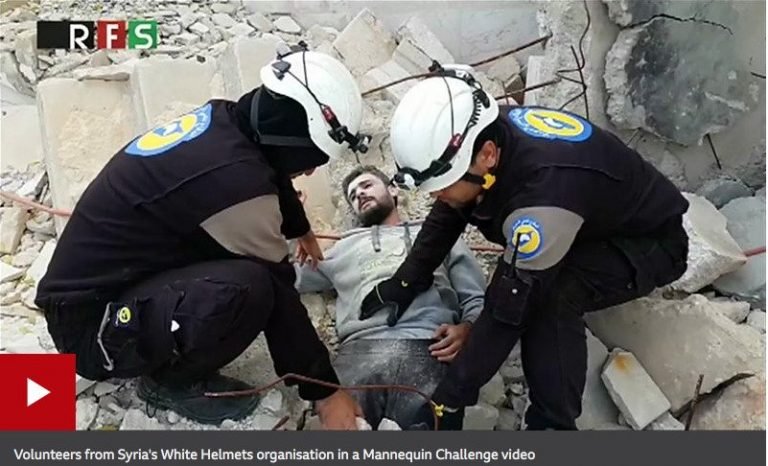 It is an achingly familiar scene. An injured man lies in the rubble as two members of the Syria Civil Defence group – known as the White Helmets – come to his aid, another apparent victim of Syria’s bloody civil war.

But all is not as it seems.

The man and the White Helmets appear frozen. The whole scene is in fact posed.

The men are performing their version of the Mannequin Challenge in a video released by activists from the Revolutionary Forces of Syria (RFS) “to raise awareness of the suffering of the Syrian people”.

Since 2013, they have searched for survivors in the aftermath of the deadly air strikes raining down on Syria’s towns and cities, saving thousands of lives.

They say they are non-partisan and a regular source of video and eyewitness accounts from the thick of the fighting.

But critics, often pro-Assad or pro-Russia accounts on social media, allege links to jihadist groups and have long claimed that the organisation fabricates reports and rescues.

This latest video has seen those critical voices grow louder, while the stunt has left others bemused.

In a statement to the BBC, the White Helmets acknowledged the involvement of two of their volunteers but said the video had not been sanctioned by the group’s leadership team.

“The video and the related posts were recorded by RFS media with Syria Civil Defence (White Helmets) volunteers, who hoped to create a connection between the horror of Syria and the outside world, using the viral Mannequin Challenge,” the statement read.

“This was an error of judgement, and we apologise on behalf of the volunteers involved.

“The video was not shared on our official channels, and we took immediate action to discipline those involved and prevent incidents such as this from happening again.

“Our volunteers are committed to saving lives by responding to, and reporting, war crimes in Syria.

“This leaves us open to attacks, not just from the bombs but from those who seek to silence us for telling the truth.”

A spokesman for the RFS told the BBC that the activist group occasionally used this kind of campaign to help shine a spotlight on the suffering of millions of ordinary Syrians.

He pointed out that in the past it had attempted to raise awareness of the conflict by leveraging the popularity of computer game Pokemon Go and comic-book heroes The Avengers.