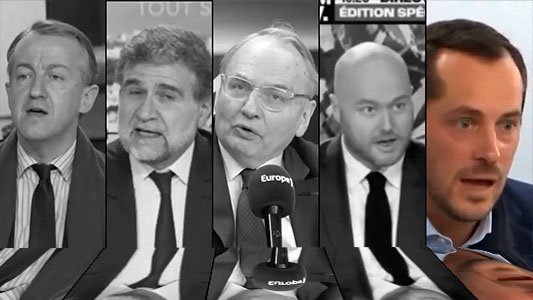 In other words, non-white immigrants are of poor quality for racists …. couldn’t be clearer.

– We can see what they’re running from and it’s not a matter of saying, “Are you really refugees?”

– This is the 20th century, we’re in a European city, and we’re getting cruise missile strikes like we’re in Iraq or Afghanistan, can you imagine?

– It will undoubtedly be a high quality immigration, on the other hand. They will be intellectuals…

– …because they are Europeans of culture, even if we are not in the European Union, we are with a population that is very close, very neighborly.

– We are not talking about Syrians fleeing the bombing of the Syrian regime supported by Vladimir Putin, we are talking about Europeans who leave in their cars that look like our cars.

– There is a difference between Ukrainians who, once again, are part of our civilizational space, and populations who belong to other civilizations

– We will have a high-quality immigration from which we can benefit.

– We are not faced with migrants who are going to pass through in an immigration logic.

– This is not a place, with all due respect, like Iraq or Afghanistan where conflicts have been raging for decades. It is a relatively civilized place…