World nuclear ban ‘not realistic’, says US ambassador to UN 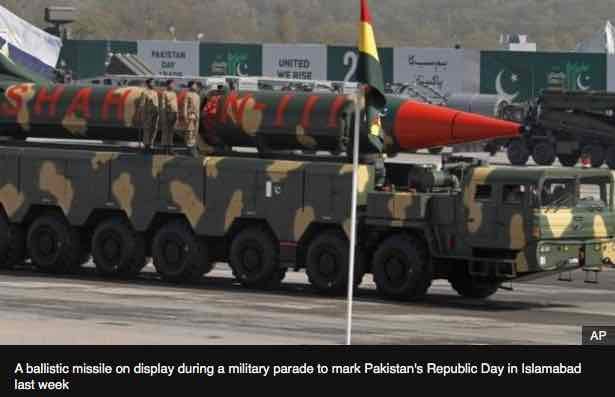 Yes, it’s much more “realistic” to get closer and closer to a nuclear holocaust destroying all Humanity. And these idiotic politicians will be held responsible for it by our Creators. The example given of North Korea using atomic bomb while all “good” imperialist countries do not have it is just absurd: even if it was to happen, the US war machine, for example, has enough power and warplanes to totally destroy North Korea without using any atomic bomb, as they did in Afghanistan, Serbia, Iraq, Libya, etc …

The most terrible hypocrisy is that they refuse to make atomic weapons forbidden while continuing to support the non-proliferation treaty, which means “only us, superpowers can have it but other countries cannot, so we can continue to dominate and bully the world.”

So, sadly, the only solution is for all other countries to get nuclear weapons as soon as possible. If Libya, Afghanistan, Iraq, and other victims of US imperialism had it, they would have never been attacked, invaded, and occupied. The message is very clear for all countries who do not wish to be the next victim of the US and Western imperialism and neo-colonialism: get atomic bombs as soon as you can and as many as you can!

In this egoist world where there are no more compassion and consciousness, if there was today a Gandhi, UK would send a nuclear bomb on him and nobody would care about it. The same way nobody cares about the fate of the Palestinian people prisoners of the huge concentration camp of Gaza and focus on their football games and stupid new talent shows, or the fate of a dog trapped in a hole.

The wonderful huge peace movement that stopped the Vietnam war and made the US lose. It cannot exist anymore as “journalists” are “embedded” among invasion’s forces, and nobody cares as long as they have their games on TV; while US soldiers and drones are killing innocent children everywhere.

As there are no more compassion and consciousness, it’s time to abandon partly the values of absolute non-violence, which are one of the bases of our philosophy, even if they still apply individually: from now on it is acceptable for Raelians of non-nuclear countries to work for the armament industries of their countries, or armed forces, in order to make it impossible to Western imperialist and neo-colonialist powers to attack, invade, and occupy them in a new modern colonization accomplished under the disguise of “bringing democracy”. Because they and nobody around the world would care at all about their non-violence. Like when France removed by force the great president Gbagbo in Ivory Coast because he was not supporting French interests, nobody moved a finger.

Sadly, the millions of Palestinian Gandhi suffering under the boots of the Israeli torturers do not trigger any reaction in the so-called “civilized world”, like in the time of the real Great Gandhi, or in the time of the peace activists against the Vietnam war. Sadly, the so-called “civilized world” of the Western powers knows only strength. Like the great Jean de La Fontaine said a long time ago, “La raison du plus fort est toujours la meilleure” (the argument of the strongest is always the best).

So, we reached the paradox of the allegedly modern civilized countries, with their mouth full of words about freedom, democracy, and human rights, impose the rule of the jungle; while they are the real savages and barbarians of the planet bringing us closer to the total destruction of Humanity. As they only understand strength, it’s time for the weakest to arm themselves as strongly as possible, including nuclear weapons. It’s time for the ex-colonized countries to become allies against Western imperialism. It’s much safer for African or South American countries to make alliances with China or India who were also devastated and occupied by Western colonization.

It’s important to notice that the UK still didn’t apologize for India colonization’s crimes in what India’s prime minister called recently a collective amnesia, and that France still dares to claim that Africa colonization was beneficial to African people while still imposing them money printed by France and a “colonial tax”… Am I having a bad dream?

And all these criminal Western powers have their eyes stirring toward Africa for new colonization, with several military forces on their territory under the disguise of humanitarian aid, or allegedly to protect French citizen in case of political violence. And of course, as soon as an African president doesn’t support the French pillage, he is killed by these military forces. It’s also interesting to notice that there are no African military forces in France to protect the African citizens who are so often victims of violence, racism, and discrimination. The double standard is obvious: French soldiers can protect French citizens in Africa but African soldiers are not welcomed in France to protect African citizens…

So, particularly for Africa, but also for South America and many other countries, it’s time to get strong, to create militias to expel Western occupation forces, and to try to get nuclear weapons as soon as possible. No Western power will hesitate one minute before invading any African country under their actual level of defense. But if they become nuclear powers, the coward Western powers, which only attack the weakest, will then not move a finger. The message is clear: in a world ruled by barbaric Western people applying the law of the Jungle, be as strong as them, get atomic weapons!

A worldwide nuclear ban is simply not “realistic”, the US ambassador to the UN has said, as nearly 40 countries stayed away from talks on the subject.

The US, Britain and France were among the countries that skipped a UN meeting to discuss a new treaty.

More than 120 others endorsed a plan for a legally binding nuclear ban.

But US envoy Nikki Haley said national security required nuclear arms because of “bad actors” who could not be trusted.

“There is nothing I want more for my family than a world with no nuclear weapons. But we have to be realistic,” she told reporters.

“Is there anyone that believes that North Korea would agree to a ban on nuclear weapons?”

North Korea has recently been testing nuclear and missile technology, despite warnings from the international community – including China.

The UN conference to negotiate a legally binding nuclear ban treaty was announced in October.

Britain, France, Israel, Russia and the United States voted “no” to the nuclear ban treaty back then, while China, India and Pakistan abstained.

Japan – the only country to have suffered atomic attacks, in 1945 – also voted against the talks.

Nobushige Takamizawa, Japan’s disarmament ambassador, said working on a treaty “without the involvement of nuclear weapon states [would] only deepen the schism and division” in the international community.

On Monday, Ms Haley said: “In this day and time we can’t honestly say that we can protect our people by allowing the bad actors to have them and those of us that are good trying to keep peace and safety, not to have them.”

Countries not attending, like the US and the UK, remain committed to the Non-Proliferation Treaty, which entered into force in 1970 and is aimed at preventing the spread of nuclear weapons and weapons technology.

But Swedish Foreign Minister Margot Wallstrom, whose country is leading the calls for a total ban “leading towards [nuclear weapons] total elimination”, along with Austria, Ireland, Mexico, Brazil and South Africa, said she expected this would “take a long time”.

“Let’s not be naive,” she said at the UN last week. “But it’s very important in these days, when you see more of this rhetoric, and also sort of power demonstrations, including threatening to use nuclear weapons.”