85% of Americans unhappy with Congress, most think it serves lobbyists, not the people 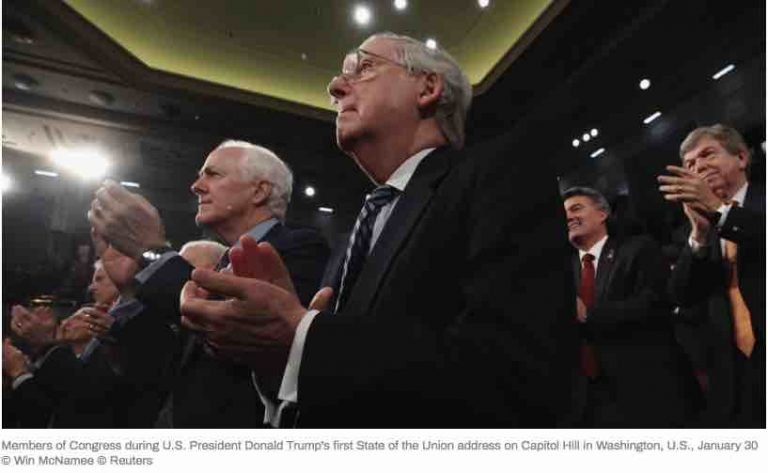 The overwhelming majority of Americans, irrespective of party allegiance, holds a dismal opinion of Congress, a fresh poll shows. It found 89 percent of Democrats and 82 percent of Republicans disapprove of the legislature’s work.

The new poll, published by the Associated Press-NORC Center on Monday, revealed that a total of 85 percent of Americans believe the Congress’s job is below par. The attitude to the Republican-controlled legislature does not change much across party lines. The number of Democrats that held an unfavorable view of Congress, 89 percent, is only seven percentage points higher than that of Republicans, at 82 percent.

While the figures are a bit more reassuring when it comes to the members of Congress, the immediate representatives of those surveyed, they are still hardly anything to brag about.

Only 44 percent of Americans approve of the work their own Congressman or Congresswoman is doing on Capitol Hill, 41 percent of Democrats and half of Republicans.

Even if some may think that the Congress’s workload is enough, it does not mean they are passing all good laws. Fewer than 20 percent of Americans believe there is merit to the lawmakers’ legislative work, while over a third of all respondents think it is mostly bad. The remainder don’t assess it as either positive or negative.

The NORC poll was conducted between 15 and 19 February.

The plunging ratings aren’t a product of the Trump era and its partisan skirmishes. Americans have long been disenchanted with Congressional politics. A glance at the Gallup Congress approval chart through the years will show that it rarely climbed over the 20 percent threshold since 2010. After a record 84 percent approval in 2002, the rating has been on a steep decline, reaching a new low in November 2013 after it slipped to just nine percent.

A survey conducted by Stanford University and the University of California-Santa Barbara, together with the AP-NORC Center for Public Affairs Research in 2015-2017, purports to explain the disdain of the American public with their elected legislators by an enormous gap between who they are supposed to serve and who they actually do serve, according to Americans themselves.

“Large majorities in both parties report lawmakers should pay attention to the majority of Americans but believe lawmakers actually pay attention to donors and elites. Rare in 2018, both self-identified Republicans and Democrats agree,” Trevor Tompson, director of the AP-NORC Center, stated in a press release on Monday.

What the researchers identify as the root cause of the problem is that 65 percent of Americans believe that their representative in Congress should pay attention to a majority in the US, while only 18 percent of respondents think that it is what they are actually doing. The part of the population most catered-for by the lawmakers are the lobbyists that “gave money to last election campaign,” according to the survey. Sixty-six percent of Americans believe that Congress actually pays attention to lobbyists, while only 11 percent agree it should be like that.

While Congress, at its current 20 percent approval rating, according to Gallup, is safe from breaking records any time soon, President Donald Trump, with his 38.4 percent job approval rating during his first year in office, became the first president to go below 40 percent in his first year, with his nearest contender in this respect being Bill Clinton, at 49.3 percent.