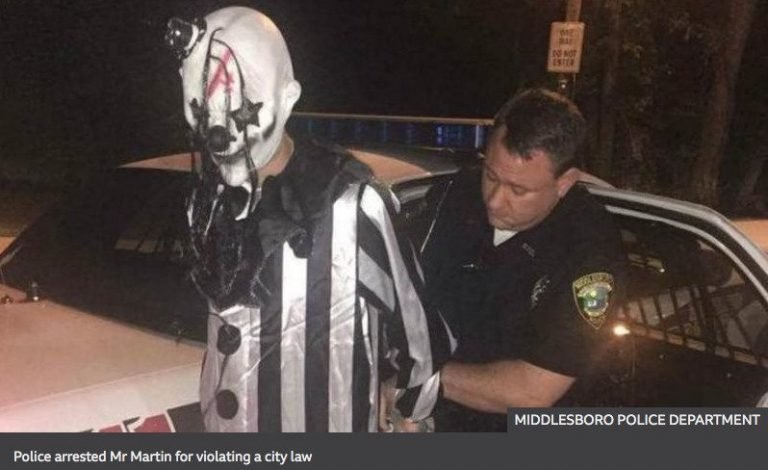 When dressing up as a clown becomes illegal, you can really see how individual freedom is truly dead. All freedom lovers should protest in the streets dressed as a clown! A 1 million clown march would be great!

Jonathan Martin, 20, was charged with wearing a mask in a public place and disorderly conduct in Middlesboro.

He was found at about 0100 EST (0600 GMT) on Friday in “full clown costume” and mask crouching among trees by an apartment complex, according to police.

Recent reports of clowns trying to lure children into woods have sparked alarm.

Police have warned individuals against dressing up in clown costumes, adding it could lead to criminal charges.

“Dressing as a clown and driving, walking or standing in public can create a dangerous situation for you and others,” police in nearby Barbourville, Kentucky, said in a statement online.

“While dressing up is not, in and of itself against the law, doing so in public and thereby creating an unnecessary sense of alarm is illegal.”

Why are clowns scary?

But the recent wave of creepy clown sightings has also led to a string of false reports to both police and on social media.

Police in Annapolis, Maryland, recently found reports of students being scared by clowns on the way to school to be untrue.

A 24-year-old man was charged with making false reports in Winston-Salem, North Carolina, after he told police a clown knocked on his window.

Meanwhile, an 11-year-old girl was arrested in Athens, Georgia, for bringing a knife to school because she was scared by social media reports that clowns were attacking children.

Mr Martin’s arrest comes as Kentucky residents have reported sightings of a clown matching the description of his costume.

A photo posted on Facebook on Wednesday showed a clown in Waco, Kentucky, dressed in a similar black-and-white costume.