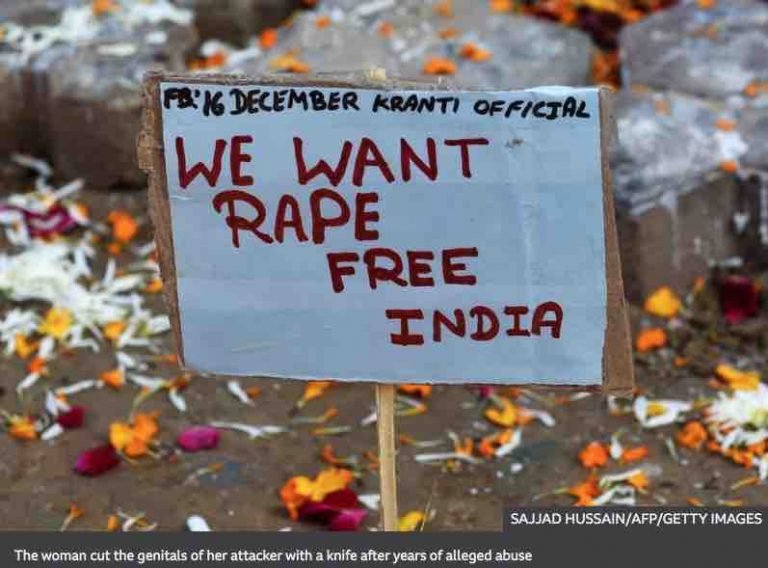 A good self-defense way to protect yourself from rapists!

A 23-year-old Indian woman has cut off the genitals of a Hindu religious teacher in the southern state of Kerala, claiming he raped her for years.

Police said the suspect, named as Gangeshananda Theerthapada, would come to the woman’s house to perform prayer rituals for her father’s health.

Her mother had hoped the self-styled holy man would ease the family’s woes.

Instead, her daughter claims he assaulted her at every opportunity.

On Friday night, she grabbed a knife and attacked him when he allegedly tried to rape her, and then called the police herself.

The alleged rapist was rushed to Thiruvananthapuram Medical College for emergency surgery.

The hospital said in a statement: “A 54-year-old man from Kollam was admitted at 12.39am [19:09 GMT] to the hospital on Saturday. His penis had been cut (90%) and was hanging precariously. There was no way it could be stitched back.

“Plastic surgeons who are urology experts in the hospital did emergency surgery to stop the blood loss and to enable him to pass urine.”

Deputy Commissioner of Police Arul B Krishna told The Times of India that the woman’s father had been bed-ridden for years.

He said the victim had recounted her abuse to her mother, who may now face charges for failing to report it.

The young woman herself is not expected to face a criminal case.

Kerala’s Chief Minister Pinarayi Vijayan has praised the victim’s bravery, saying it was “a courageous and strong act”.

Scrutiny of sexual violence in India has grown since the 2012 gang rape and murder of a student on a Delhi bus.

Protesters frequently call for rapists to be hanged – the harshest sentence available for the crime.

Violent sexual attacks against women and children continue to be reported across the country.