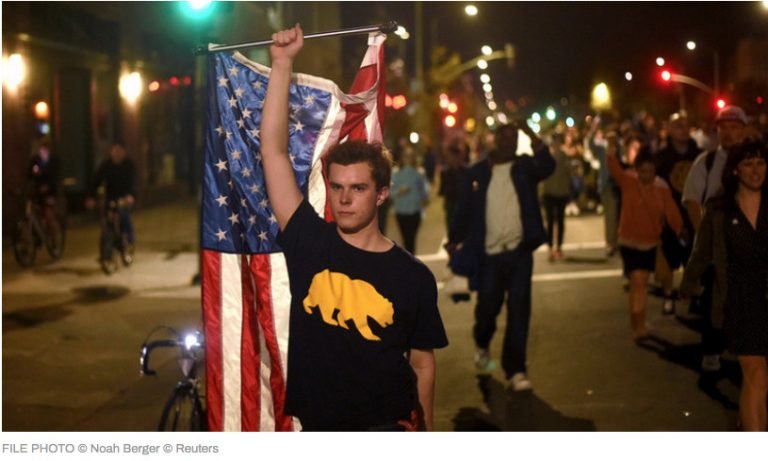 Wonderful! All big blocks like the USA, China, Russia are dangerous for peace as they contain the poison of imperialism and totalitarianism. Human-size microstates are the future, states based on ethnicity, affinities, languages, and culture; and all federated in a world government.

A proposal for California to break away from the United States has been submitted to the Secretary of State’s Office in the state capital. If it qualifies, it could trigger a vote on whether the most populous US state should become a separate nation.

The group behind the proposal, Yes California Independence Campaign, was cleared on Thursday by Californian Secretary of State Alex Padilla to begin the bid to collect some 600,000 voter signatures required to put the ambitious plan on the ballot, AP reported. The initiative would ask voters to repeal part of the state constitution that declares California an “inseparable part of the United States of America.”

The proposed constitutional amendment, titled California Nationhood, would also ask voters to repeal the clause that describes the US Constitution as the “supreme law of the land.” If approved, it suggests scheduling a vote in March 2019 to ask Americans, “Should California become a free, sovereign and independent country?”

The initiative maintains that the election “shall constitute a Declaration of Independence from the United States of America” if two key conditions are met: at least 50 percent of registered voters participate and at least 55 percent vote ‘Yes’.

If both of conditions are satisfied, the measure requires submission to the United Nations of an application for the “newly-independent Republic of California” to be a UN member state, the initiative says, as cited by the Sacramento-based Legislative Analyst’s Office (LAO).

Being a US state is “no longer serving California’s best interests,” the movement claims.

“Not only is California forced to subsidize this massive military budget with our taxes, but Californians are sent off to fight in wars that often do more to perpetuate terrorism than to abate it. The only reason terrorists might want to attack us is because we are part of the United States and are guilty by association. Not being a part of that country will make California a less likely target of retaliation by its enemies,” the campaign argues, among other things.

“I think we’d have the votes today if we held it,” he added.

It must submit the valid voter signatures by July 25 to qualify for the November 2018 ballot.

The number of Californians who would rather see their state a sovereign nation than part of the United States jumped to 32 percent, a new Reuters/Ipsos opinion poll showed earlier this week. In 2014, it was only 20 percent.

The support for independence apparently rose in the wake of Donald Trump’s election in the November presidential election.

The poll was taken from December 6 to January 16 and has a credibility interval of 5 percentage points in California.