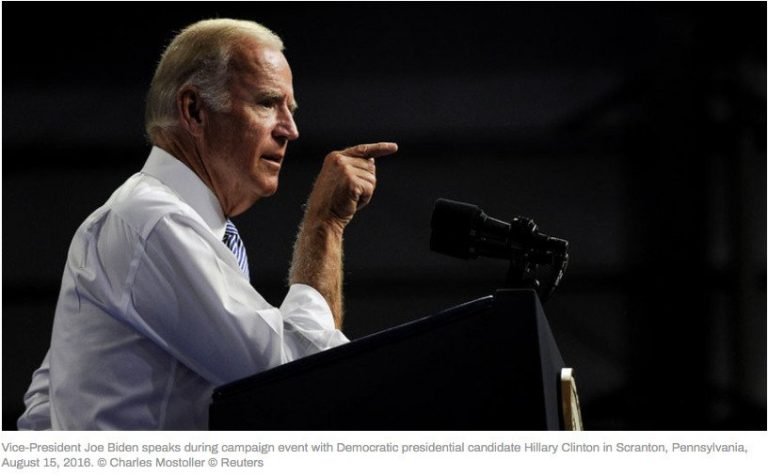 Now that the truth is revealed, it’s time for Japan to write by itself its own constitution and get rid of all US military bases, which are an insult to the Japanese victims of US imperialism throughout centuries starting with the black ships forcing Japan to welcome US traders as “diplomats” under canons threatening to destroy the Imperial Palace in 1854. US imperialism started a long time ago…

US Vice-President Joe Biden made a remark slamming Donald Trump, but ended up in deep water with Japan instead, saying that the US “wrote Japan’s constitution.” His comment was slammed as “arrogant”, “wrong”, and “insensitive” in Japan and beyond.

Others pointed to the fact that Biden’s words could trigger reform in Japan.

Some said that Biden didn’t check his facts properly, as he “essentially refuted the historical fact that Article 9 was proposed by then Japan PM Shidehara and approved by Gen. McArthur [sic].”

Biden’s remark came at a speech in Pennsylvania on Monday, referring to Donald Trump’s earlier statement: if Japan doesn’t cash in to keep the US presence in East Asia, it may be forced to defend itself without Washington’s assistance, and maybe even have its own nuclear weapons.

So Biden lashed out at those words, saying that “he [Trump] talks cavalierly about encouraging other nations … to develop nuclear weapons.”

“Where was he when in school?” Biden asked. “Someone who lacks this judgment cannot be trusted,” he said. “He’s not qualified to know the [nuclear] codes.”

“Does he not understand we wrote Japan’s constitution to say they couldn’t be a nuclear power?” he added.

His words got enormous backlash from both Japanese and international media, with the majority of outlets saying that it’s out of extraordinary for such a high US official to put it quiet so straightforwardly.

Japan’s Foreign Ministry refused to comment on Biden’s remark, but referred to Prime Minister Shinzo Abe’s statement of March 2015, in which he said that the constitution had been written by occupying forces over a short period of time.

Japan’s constitution was adopted in 1947, and was indeed compiled under the US occupation that started after WWII.

US authorities made the first draft and edited it following consultations with Japanese officials. The document was then approved by the Diet, the Japanese parliament.

However, the constitution doesn’t mention nukes specifically: Article 9 urges the Japanese to “forever renounce war” and never have “land, sea and air forces, as well as other war potential.”

In the 1950s, Japan set up the Self-Defense Forces including ground, sea and air forces, with the authorities saying the force wasn’t gathered to wage wars.