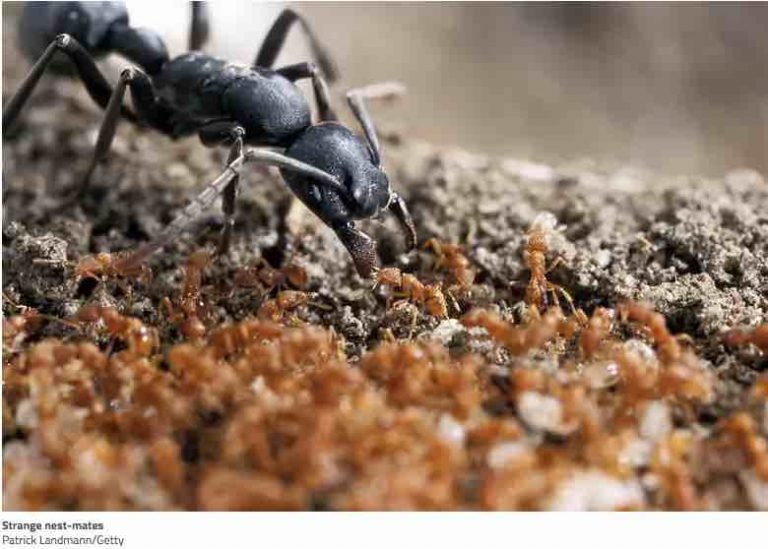 Animals teaching a lesson to humans: love each other and share this planet even if you have different skin color, religion or shape…

One is a massive black ant, the other is a tiny, only distantly related, brown ant. But together they form a perfect team to build and guard a shared nest.

This insect odd couple is found in the forests of the Lamto Ecological Reserve in Ivory Coast. The 15-millimetre-long Platythyrea conradti is a highly skilled engineer, building nests from the organic material – like leaf mulch – it finds in its environment. Small species then move into the organic matter – providing the large ants with a ready meal.

One species the large ant doesn’t eat is the 2.5-millimetre-long Strumigenys maynei. This small ant moves into the nests, where its highly aggressive nature helps deter any unwanted invaders.

“This is a remarkable and rare example of cooperation between two ant species that share little in common,” says Thomas Parmentier, an evolutionary biologist from the Catholic University of Leuven in Belgium. “One is large and the other minuscule, they belong to unrelated genera and have markedly different behaviour.”

Together, though, they can maintain a safe and efficient home, he says.

The rare association was first recorded in 2001, when Christian Peeters and his student Kolo Yéo, from the Pierre and Marie Curie University in Paris, were looking for wingless queens of P. conradti in the Lamto reserve.

Small surprise
After finding the trees where these ants make their nests, they sawed off a few branches and took them back to their lab. When they split open the branches they were surprised by what they found.

“This is when we discovered the reddish ‘tiny ant’ that nested in separate small chambers close to the big ants,” says Peeters. At that time, however, Peeters was only interested in the big ants.

Some 15 years later, the unusual ant colonies are being investigated in more detail. Parmentier and Yéo – now director of the Lamto reserve – collected 10 nests and examined the behaviour of both species, tracking their aggressiveness and studying the odours they produce.

Parasitic species often sneak into nests by producing odours that match those of their host. But the team’s results show that, in this case, both species produce unique odour cues as they move around the nest. Despite this, the species are almost never aggressive to one another.

“It was astonishing that both ant species tolerate each other’s presence in spite of clearly distinct nest-mate recognition cues,” says Parmentier. But he says the biggest surprise was how the ants behaved towards intruders.

Like small pitbulls
“The large Platythyrea ant was very shy and avoided direct confrontations with smaller enemies. The Strumigenys ants were, in contrast, small pitbulls which attacked and deterred enemies very efficiently,” he says.

But these two ants seem to form a truly mutually beneficial relationship, called parabiosis, because the two species share a common home and both gain.

It is still unclear why they might cooperate, says Parmentier. Perhaps the larger ants lack a defence worker caste and the smaller ants took on the job and in return can benefit from the small prey thriving in the nest constructed by Platythyrea.