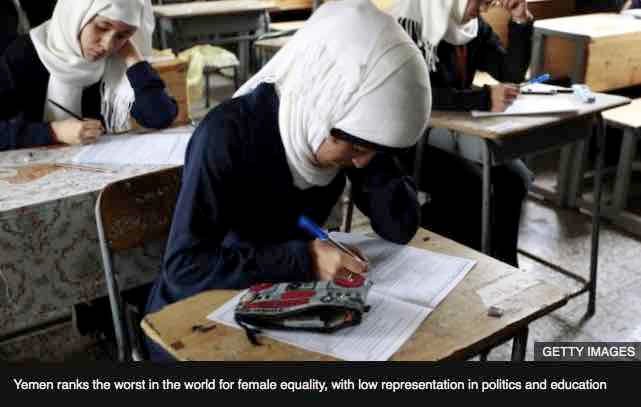 More than others, women need a world revolution!

The equality gap between men and women would take 100 years to close at its current rate, an economic monitoring group has suggested.

It is the first time that data from the World Economic Forum (WEF) has shown a year-on-year worsening of the gender gap since it began charting it in 2006.

Women are measured as having 68% of the chances and outcomes that men have.

This is slightly down from the 68.3% measured last year.

The group predicts that it would take a century to close all areas of equality it monitors globally, well up from the 83 years predicted in 2016.

Gender parity is closest in areas of health and education, it says, but significant gaps in economic participation and political empowerment continue to endure across the world.

Women will have to wait 217 years before they earn as much as men and are equally represented in the workplace, the figures suggest.

Nordic countries remain among some of the world’s best for overall equality. Iceland tops the list with a 12% gender gap across all the WEF’s measures. Norway, Finland ands Sweden are all in the top five.

Rwanda came fourth in the list for overall gender equality with a gap of 18%. The country has the highest share of women in parliament in the world – they occupy three in every five seats.

Nicaragua, Slovenia, Ireland, New Zealand and the Philippines also made the top 10 on the Global Gender Gap rankings.

Women in the Middle East and North Africa fared the worst, with war-torn Yemen coming last on the list with a gender equality score of just 52%.