Trump threatens to build up US nuclear arsenal until Russia, China ‘come to their senses’ 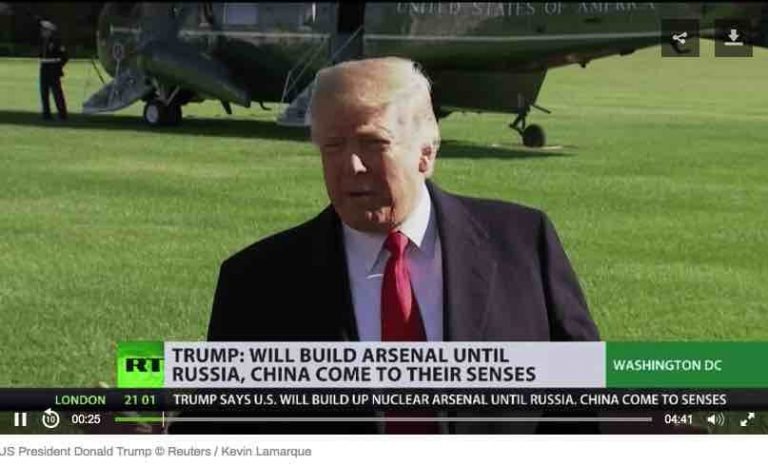 “Non-proliferation treaty”…lol …In other words “Small nations, you are not mature enough to own nuclear weapons buy we, the dominating white race, we need to have more and more atomic bombs in order to continue our imperialist neo-colonialist politic.”

US President Donald Trump threatned Russia and China that Washington intends to build up its nuclear arsenal until “people come to their senses.”

The president said his words were directed towards Moscow and Beijing, as he prepared to unilaterally leave the Intermediate Nuclear Forces in Europe (INF) treaty. The US president implied China should be part of any new nuclear arms control treaty.

“Russia has not adhered to the agreement,” neither in form or in spirit, Trump told reporters outside the White House on Monday, before departing for a campaign rally in Texas.

he said, referring to the US nuclear arsenal. “When they do, we will all be smart and we’ll stop. Not only stop, but we’ll reduce, which I’d love to do.”

Asked if this should be taken as a threat, Trump said yes.

The US has “more money than anyone else by far,” Trump added, implying an arms race wouldn’t come as a burden. “You can’t play that game on me.”

The treaty, which went into effect in June 1988, was a major achievement of Cold War detente and helped defuse nuclear fears in Europe. If Trump goes ahead and withdraws from the INF, that would leave the Strategic Arms Reduction Treaty (New START) as the last obstacle to uncontrolled nuclear proliferation. The treaty will expire in 2021, and Washington has not yet decided on renewing it, Trump’s national security adviser John Bolton said during his visit to Moscow.

Over the years, Moscow and Washington have repeatedly accused each other of violating the deal. While the US has alleged that Russia has developed missiles prohibited by the INF, Moscow has pointed out that the US anti-missile systems deployed in Eastern Europe can actually be used to launch intermediate-range cruise missiles. Those systems were deployed after Washington unilaterally left the anti-ballistic missile (ABM) treaty in 2002.

In his impromptu press conference, Trump implied that China should be part of any new nuclear arms control treaty. He did not say how his administration intended to achieve that, given the current poor state of affairs between Beijing and Washington, propelled by a trade war and military tensions in the South China Sea.

Trump’s hardline approach to trade deals has worked, with Canada, Mexico and the EU quickly coming around to his point of view. His repudiation of the 2015 Iran nuclear deal, however, has not produced another nonproliferation agreement with Tehran.