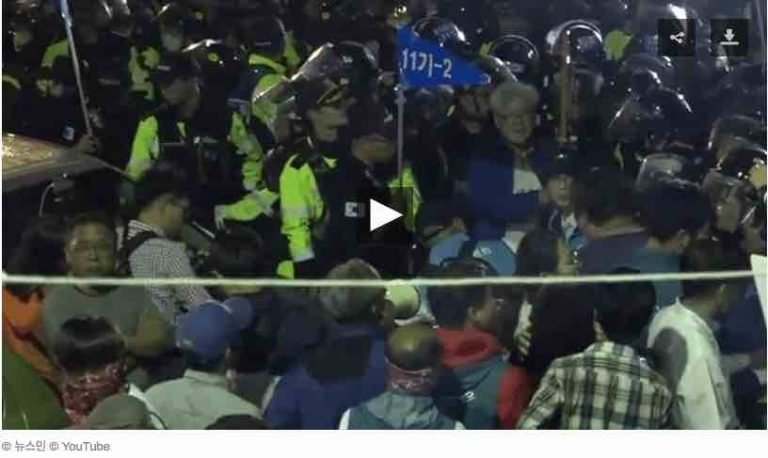 And they are right! Every intelligent human being wants peace. Yankees go home and bring your weaponry with you!

Dozens of protesters were injured in clashes with police as hundreds went out to protest the installation of the Terminal High Altitude Area Defense (THAAD) system in the South Korean province of Gyeongsangbuk.

Despite the protests, four additional interceptor launchers arrived at the base early Thursday, several hours after police quashed the unrest. The launchers were transported to the site by some 10 US military vehicles from the Osan Air Base near Seoul.

Nearly 400 people showed up in front of the community’s administrative building to protest the deployment of the advanced US missile defense system. The standoff occurred near the future site of the rocket launchers at the US base in Seongju, some 300 kilometers (135 miles) southeast of the capital.

Injuries have been reported among the residents, as police officers tried to scatter the crowd. The protesters reportedly tried to break into the administration building.

As the missile systems were entering the site, some of the demonstrators attempted to chain themselves to the trucks.

Several demonstrators and police officers injured in the scuffles were reportedly taken to the hospital.

Live footage shows riot police officers and villagers in their droves crowding into a small area. Local media reported it was difficult for medical staff to get to the injured.

According to the Newsmin website, the residents have been gathering since 3:15pm local time, with no major disturbances breaking out.

Four civilians tried to cross the fence of the THAAD site. Those arrested have been taken to Kimcheon police station for investigation.

The protest and scuffles followed an announcement by the South Korean defense ministry on Wednesday that the batteries will be installed as soon as Thursday. Designed to protect South Korean and American troops from the unpredictable Northern neighbour, THAAD’s deployment has been sped up because of the growing threat from Pyongyang.

The decision came despite longstanding protests of villagers and political activists, who fear the deployment will further escalate the crisis on the peninsula and make their town a primary target for the North’s attacks.

On Sunday, North Korea tested an underground hydrogen bomb, which can be mounted on an intercontinental ballistic missile, prompting the international community to condemn the blast as a “dangerous provocation.” While the US insists that it is time to impose „the strongest possible measures,“ Moscow and Beijing are calling on both sides to consider the double-freeze plan, which would imply Pyongyang suspending its missile tests in exchange for a halt in joint US-South Korea drills.

‘Sorry, but they’ve got to go somewhere’
Michael Patrick Flanagan, an attorney and former member of the US House of Representatives, told RT that although he “cannot blame” the locals for voicing their concerns over the deployment he believes that the decision to station additional THAAD launchers is justified by the growing threat from the North.

“If I were having a defense system designed to prevent North Korean aggression put next door to me, that would make me a specific target of an attack because of this weapons system, I would have great concern, too,” Flanagan said, adding that he is “sorry” but the launchers “have to go somewhere.”

“It got to go somewhere and we got to protect South Korea, the region, Japan and eventually the United States, now that North Korea has long-range missiles from their aggression,” he said.

Noting a new, more hardline, take on North Korea adopted by the new US administration compared to the previous one, he said that the US used to give in to blackmail from Pyongyang, but that is not the case anymore.

“We cannot do that anymore, it has to stop now,” Flanagan said.