A new era for humanity 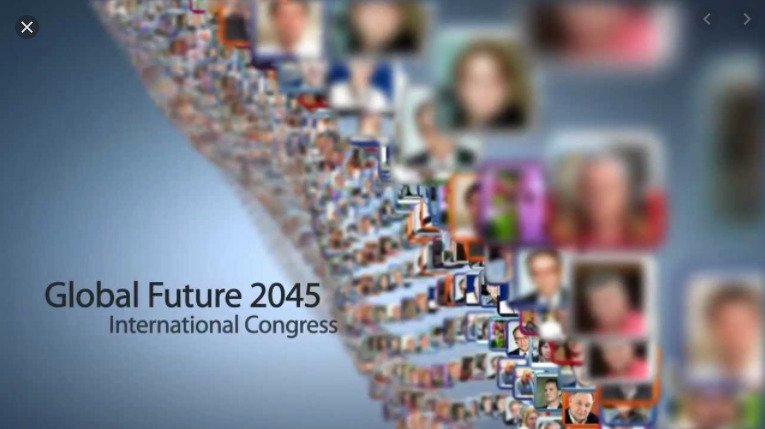 And the Raelian Movement is the only philosophy that fits perfectly with the spiritual aspect of this beautiful project and which is evoked at the end of the video.

In February of 2012 the first Global Future 2045 Congress was held in Moscow. There, over 50 world leading scientists from multiple disciplines met to develop a strategy for the future development of humankind. One of the main goals of the Congress was to construct a global network of scientists to further research on the development of cybernetic technology, with the ultimate goal of transferring a human’s individual consciousness to an artificial carrier.

2012-2013. The global economic and social crises are exacerbated. The debates on the global paradigm of future development intensifies.

Simultaneously, the 2045.com international social network for open innovation is expanding. Here anyone interested may propose a project, take part in working on it, or fund it, or both. In the network, there are scientists, scholars, researchers, financiers and managers.

2013-2014. New centers working on cybernetic technologies for the development of radical life extension rise. The ‘race for immortality’ starts.

2015-2020. The Avatar is created — A robotic human copy controlled by thought via ‘brain-computer’ interface. It becomes as popular as a car. 2020. In Russia and in the world appear — in testing mode — several breakthrough projects: Android robots replace people in manufacturing tasks; android robot servants for every home; thought-controlled Avatars to provide telepresence in any place of the world and abolish the need business trips; flying cars; thought driven mobile communications built into the body or sprayed onto the skin.

2020-2025. An autonomous system providing life support for the brain and allowing it interaction with the environment is created. The brain is transplanted into an Avatar B. With Avatar B man receives new, expanded life.

2025. The new generation of Avatars provides complete transmission of sensations from all five sensory robot organs to the operator.

2035. The first successful attempt to transfer one’s personality to an alternative carrier. The epoch of cybernetic immortality begins.

2040-2050. Bodies made of nanorobots that can take any shape arise alongside hologram bodies.

2045-2050. Drastic changes in social structure, and in scientific and technological development. All the for space expansion are established. For the man of the future, war and violence are unacceptable. The main priority of his development is spiritual self-improvement.

A new era dawns: The era of neohumanity.